Upcoming graphics content differs from a previously leaked beta, leading to claims that the game is being censored to appease Chinese regulators 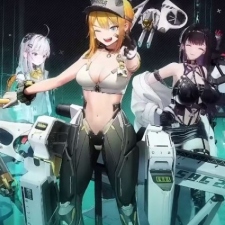 Goddess of Victory: Nikke fans have turned to social media to complain about the censorship of in-game content, reports Gamebraves.

This latest round of complaints comes in the wake of a new banner, showcasing an upcoming costume for the character Rupee. This outfit differs slightly from the design datamined during a recent beta, thanks to the addition of a small skirt and a fishnet texture to the character’s sheer bodysuit.

This isn’t the first time that character designs have changed from leaks or beta content, as characters such as Yuni have undergone similar changes.

Fans have turned their ire on publisher Tencent, accusing the company of censoring the title and toning down the sexual content to appease Chinese regulators. Neither Tencent or developers Level Infinite and Shift Up have commented on the design changes.

Despite many fans citing China as a chief cause in the modification of the costume, it's worth noting that the game hasn’t been released in China. Although the game is available in Taiwan and Hong Kong, players in both territories need to utilise a different client to access it.

The power of sex appeal

Sexual content would appear to be an important factor in the success of Goddess of Victory: Nikke, with the app store page stating that the game is “an immersive sci-fi RPG shooter game, where you recruit and command various maidens to form a beautiful anime girl squad”. Many of the characters wear revealing costumes, seemingly designed to titillate the audience.

Despite this, different countries have different regulations and laws regarding what can be portrayed on screen, with games being heavily edited in some territories in order to receive certification, whether that's by toning down violence or removing sexual content. As such, as minimal as these changes are, it seems that fans are concerned that Tencent is compromising the game’s artistic vision for the sake of greater earning potential.

Earlier this year, we listed Tencent as one of the top 50 mobile game makers of 2022.