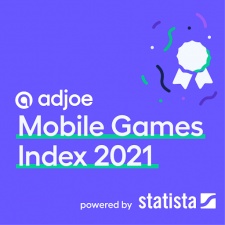 It’s no secret that the mobile gaming industry is accelerating at a rapid pace, particularly given the changes to the way we live our lives over the last 18-20 months. And while downloads might be at an all-time high, that’s no guarantee that players are going to stick around or better yet keep coming back to your game time and again.

That's why adjoe and Statista have teamed up to take a holistic look at the current mobile gaming landscape and celebrate the games that have most successfully won users’ attention. Released today, the first edition of the Mobile Games Index takes into consideration adjoe’s first-party data to highlight the apps that have achieved the highest amount of daily time spent per app category and region.

The app rankings give app developers a clear idea of where they can see themselves in their direct competition - and which top-ranked games to look at per category to improve.

Gaming Giants Sweep Aside the Competition

The Index highlights the machines of the mobile gaming industry such as Applovin’s Lion Studios and Barcelona-based SocialPoint as the studios to beat. According to the recently released Index, both Lion Studios “Save the Girl” and Social Point’s “Dragon City” have TOP 5 placements in the charts in each of the 5 regions for their corresponding app category. Further highlighting Lion Studios’ popularity, their game Ink Inc - Tattoo Drawing also made the top five in Latin America (LATAM).

Reaching the number one placement in a region is an outstanding achievement, representing the studio’s game having a higher average time spent per day than any other game in their category. The index sees impressive results of Casual Azur Games (Hypercasual), Gameberry Labs (Casual Games), Vizor Apps (Midcore) and Lilith games (Harcore), each scored the most number one placements in their category.

Casual Games for the Win

Among them, casual games rule the roost with 50 per cent higher time spent daily than the other four categories on the Index. The category includes a wide range of apps including board games, educational games, puzzles, trivia sports games and those labeled casual. Within this subgenre of apps, board games emerge as a clear winner of users’ attention. Here we see board games, including Scopely’s Yahtzee, achieving positions across nearly half of the Index.

Ones to watch: Social Casino

With leading companies such as Playtika and Huuuge Games taking their studios public, 2021 has been the year of the Social Casino initial public offering (IPO). The Index reveals that while these studios are the big hitters, they might have a smaller competitor to watch out for. According to the Social Casino sub-section of the Index, South Korea’s Bagelcode has been able to claim rankings in every region across the report. Something not seen by any of the bigger players.

Overall, casino games come out as the second most popular app category with a global average of 17.1 minutes of game play per day. When we cut this by age we see that social casino games are the top app category for users aged 40 plus, which echoes a trend seen in casual games: the older the users, the more they play.

The Mobile Gaming Index also cuts its data by gender showing that female gaming enthusiasts are a force to be reckoned with. Women clocked up more time spent playing mobile games in every category (hypercasual, casual, midcore and social casino) apart from hardcore games, where men have an average eight per cent higher gaming time globally. This equates to around 17 minutes of daily game play. The report also highlights that people who play games span the generations, with 40-49 and 50 plus age groups often coming out on top in terms of time spent daily.

Additional data provided by Statista underlines the dominance of China in the global mobile gaming landscape. When looking at mobile game revenue, China is currently leading the pack with 90 million USD in revenue in 2021. And, that’s projected to grow to a massive 129 million USD by 2025.

China reigns supreme compared to the rest of the world when it comes to mobile game downloads. The trend is in keeping with China’s herculean mobile app economy, where even the most basic payments and transactions are carried out through apps such as Alipay and WeChat Pay. Interestingly, while the U.S. ranks second in terms of mobile game revenue, its number of downloads is comparatively low at just 7.2 billion.

Delving deeper into insights from China, we see that gamers are slightly more likely to come from a low income background (35 per cent). And in terms of gender, male gamers (53 per cent) are more prevalent than female players (47 per cent). And, we see the highest concentration (34 per cent) of games with the 25-34 age group. All of this adds up to China being a key market for advertisers and game developers.

You can download the full adjoe Mobile Games index - powered by statista - here.

adjoe is a leading mobile platform developing cutting-edge advertising and monetization solutions that take our app partners’ business to the next level. Our unique ad unit “Playtime” has made us one of the fastest-growing ad platforms and top-ranking user acquisition sources for app publishers worldwide. Learn more about how adjoe is reshaping the way apps operate their business.

Your platform for light-speed research. Statista is a leading provider of market and consumer data that aggregates data from partnerships and external sources while providing self-sourced content. With over one million statistics and more than 80,000 topics from 170 industries, Statista serves as a reliable starting point for quick and comprehensive research.

Learn more about how Statista can equip you with top-quality data.