But US is darker 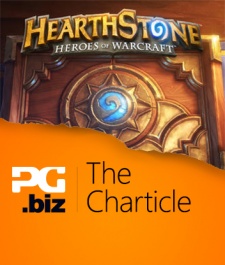 Blizzard's World of Warcraft-themed iPad-only card battler, Hearthstone: Heroes of Warcraft, is an addictive, rewarding, and highly competitive free-to-play game, which means that it should feel right at home on the App Store.

After capturing the hearts and minds of PC gamers everywhere, Hearthstone will be looking to make a similar impact on the iPad wielding denizens of Apple's tough-to-crack marketplace.

Of course, no game has a God-given right to succeed on the App Store, so Hearthstone will need to show plenty of fight if it hopes to reach the top of the charts.

Hearthstone's performance in the US will likely be a surprise.

The game entered the US top grossing chart at #15 before climbing into the top 10 later on in the week.

However, since breaking into the top 10 the game has struggled to push onwards, peaking at #9 before dropping back down to #10 a day later.

It might be a top 10 game right now, but Hearthstone's position is far from secure.

Hearthstone's European tour has been drawing in far bigger crowds.

On the EU5 top grossing chart - which looks at France, Germany, Spain, Italy, and the UK - Hearthstone has broken into the top 10 in every country bar Italy, where it fell at the final hurdle, peaking at #11.

That shouldn't hurt too much though, because in the other major European countries Hearthstone has good progress.

In France, Germany, Spain and the UK, Hearthstone sauntered into the top 10 and now looks extremely comfortable at the top, especially in France and Germany where the game peaked at #5.

It's evident that Hearthstone is making a serious bid to be a regular in the top 10, but we've yet to see the game reach the summit of the charts.

So can Hearthstone change that in Asia?

King in the East

The answer to that question is a resounding yes. Hearthstone has taken the Asian top grossing charts by storm, taking the #1 spot with ease in both South Korea and China, which has its own specific Hearthstone (China) release.

Despite the game's failure to launch in Japan, where it couldn't find consistent form inside of the top 100, Hearthstone has soared in China and South Korea, taking the top spot in both countries only 2 days after launch.

Blizzard's PC games have been very successful in both countries, of course.

Since becoming the king of the charts, Hearthstone has refused to relinquish its throne. If the game can maintain that consistency in Asia, and builld on its good start in the West, it might just become of the App Store's biggest players.

When it comes to Hearthstone's Asian success, Japan is the outlier