But sunk in the US 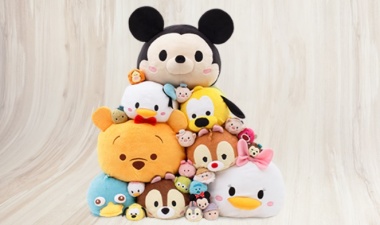 Disney Tsum Tsum, a puzzle game published by Disney on social messaging service LINE, caught our attention a few months ago when it climbed the revenue rankings on both iOS and Google play following its global release.

Originally, the game was only available in Japan, where it stormed the charts, becoming the #1 game in terms of combined App Store and Google Play downloads, and the #3 game in terms of revenue.

Through the use of in app promotions, the game also brought about the sale of 1.6 million Tsum Tsum plashes in Japan.

Since then LINE and Disney have taken the game global, with the mobile social network announcing 30 million downloads.

So let's find out where those downloads have been happening and whether the game has been top grossing.

Korea is one of the big three APAC mobile game markets - the others being Japan and China - but Disney Tsum Tsum's performance in the country has not been good, most likely because LINE has weaker penetration in Korea.

A peak position of #86 suggest Disney Tsum Tsum has potential, though the puzzler's inability to maintain a place anywhere near the top suggests we need to look elsewhere for its success.

The rise of the rest

While the game's efforts in South Korea will be a definite cause for concern, it's not all doom and gloom in the east.

In other regions, such as Indonesia, Thailand, Hong Kong, and Taiwan, Disney Tsum Tsum has received a very warm welcome.

In Taiwan and Thailand, for example, the game has spent a lot of time in the top 100, particularly in Thailand, where it's a solid member of the iPhone top 50 top grossing chart.

Even though its performance in Taiwan has been a little more unpredictable, a peak position of #14 - combined with a peak of #6 in Thailand - is a good result.

In Hong Kong and Indonesia, it's a similar story. The puzzler climbed into the top 50 in both countries with relative ease, peaking at #7 in Hong Kong and #11 in Indonesia.

Again, the game has been more consistent in Hong Kong (basically a smaller, more lucrative per head version of China), where it's a productive member of the top 50.

In Indonesia, however, Disney Tsum Tsum's performance has become increasingly inconsistent. The game now appears to be in a state of flux, dropping out of the top 250 one week before climbing into the top 20 during the next.

Stillborn in the USA

As for the key western market - the US - despite LINE's 25 million users in the country, the game hasn't found a stable audience.

Looking at the top 250 top grossing chart for iPhone, the game has peaked at #94, but more generally has been outside the top 200.

It's a similar story for Disney Tsum Tsum on the US top grossing chart for Google Play.

The game's performance on Android devices has been more consistent than on iOS, though that consistency has come at a price, with the game failing to break into the top 100, peaking at #143.