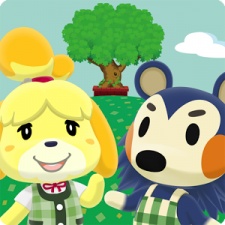 Animal Crossing: Pocket Camp came to mobile on November 21st and it feels like everyone's been talking about it.

As comes with the territory for Nintendo releases, this first free-to-play entry in the village sim series has generated considerable interest outside the traditional mobile gaming audience.

And it only took six days for the game to rack up 15 million downloads.

But what can be learned from Pocket Camp's performance in its first week and how does it compare to that of Miitomo, Super Mario Run and Fire Emblem Heroes?

Animal Crossing: Pocket Camp arrived a day earlier than anticipated on both iOS and Android.

Its impact was immediate, shooting to the top of the US download charts on both iPhone and Android at launch - and holding that position until November 28th, a full week later.

As of November 29th, Pocket Camp sat at fifth in the US iPhone download charts and second in Android's equivalent rankings.

All told, it's hit the top spot in the App Store download rankings of 16 countries, including the UK, Japan and Australia.

Meanwhile, the game has managed healthy grossing positions despite its relatively light monetisation.

Its highest position so far in the US iPhone grossing charts has been 50th on November 23rd, and it sits at 85th as of November 29th. Since its first day on the App Store, it's remained comfortbly within the top 100.

In Nintendo's native Japan the game launched on November 22nd, as originally intended, and shot immediately to third in the country's iPhone grossing charts. It remained in the top 10 until November 29th, when it dropped slightly to 12th.

By now Nintendo has released a number of titles for mobile. It all started in March 2016 with Miitomo, which was a very different proposition from its later releases, being more a social networking app than a game and having no pre-existing license to leverage.

But the curiosity surrounding Nintendo's first mobile release was enough to generate a similar performance in the download charts.

Indeed, it's easy to forget that Nintendo's least memorable mobile outing topped the US iPhone download charts for a full week when it first launched. In fact, on downloads alone, it would appear that Animal Crossing Pocket Camp is on a similar trajectory to Miitomo.

Even in terms of monetisation, Miitomo's first week was not markedly worse than that of Pocket Camp - it remained largely in the top 100 US iPhone grossing charts, peaking at 76th.

Miitomo's drop-off is something for Nintendo to learn from and be wary of.

But just a month later it was somewhere in the 500s, and in four months it had dropped out of the grossing charts entirely. Nintendo has surely chalked this up as a learning experience, and Animal Crossing has more obvious long-term appeal, but it's something for the firm to be wary of.

After Miitomo came Super Mario Run, which was experimental by Nintendo in an entirely different way: its free-to-start, effectively try-before-you-buy approach standing out like a sore thumb in a market long acclimatised to freemium.

It hardly needs saying that a mobile debut for one of the world's most recognisable ganes characters did well in the download charts. In fact it topped the US iPhone download charts for its first 10 days.

Super Mario Run made it to number one in the download charts in 149 countries, dwarfing Animal Crossing: Pocket Camp's 16, and putting the respective sizes of the franchises into perspective.

The strong start was reflected in the US iPhone grossing charts, which Super Mario Run topped for its first five days, powered by a $9.99 IAP to unlock the full game.

But like Miitomo, albeit for very different reasons, the drop-off came quickly. Two months later the game was at 248th in the US iPhone grossing charts and it remained at around this level for the first half of 2017.

The most apt comparison for Animal Crossing: Pocket Camp is Fire Emblem Heroes.

Things got worse in the latter half of this year, but it's worth noting that the game has still yet to fall out of the top 500 grossing positions. Sales and updates have even prompted spikes in some cases, most notably to 132nd on October 1st, while the game occupied 309th spot as of November 29th.

A release on Google Play in April 2017 saw the game jump to the top 20 on Android, gradually falling to a top 400 position by September.

But by far the most apt comparison for Animal Crossing: Pocket Camp is Fire Emblem Heroes. Both are franchises of a similar size (at least in terms of Western following), and were announced together between the launches of Miitomo and Super Mario Run.

In the week of its US launch, Fire Emblem Heroes' rankings in the US iPhone download charts were considerably lower than Animal Crossing: Pocket Camp in a comparable period.

While Pocket Camp topped the chart for a full week, Fire Emblem Heroes has not done so in its lifetime. And yet, the latter shot straight into the top 10 on the US iPhone grossing charts while Animal Crossing has only narrowly - and fleetingly - made the top 50.

Fire Embem Heroes remains a strong grosser for Nintendo, thought to have raked in $100 million+ and ranking at 9th in the US iPhone grossing charts as of November 29th. Early comparisons raise serious question marks about whether Animal Crossing: Pocket Camp is capable of doing the same.

It is, however, very early days for Nintendo's latest mobile game.There is more than enough time, and positive signs, for it to become an important game for Nintendo in its own right.