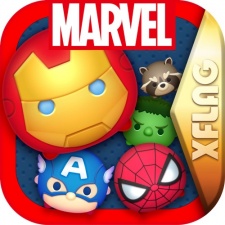 As of June the LINE-integrated and published Disney Tsum Tsum had achieved an impressive total of 60 million downloads.

And yet, intriguingly, Disney has opted not to reprise its partnership with The LINE Corporation for its superhero-branded follow-up, Marvel Tsum Tsum.

Instead, Japanese developer Mixi - best known for the phenomenally successful Monster Strike - has been brought on board as the developer and publisher of the title.

Marvel Tsum Tsum is available now in the US but is yet to hit worldwide launch.

So to find out more about Mixi's approach, PocketGamer.biz reached out to Marvel Tsum Tsum's Senior Producer Erika Nakamura.

PocketGamer.biz: With Mixi best known for Monster Strike, why do you think Disney chose you as a partner for Marvel Tsum Tsum?

Erika Nakamura: In the beginning, Disney and [The LINE Corporation] were working together to create Marvel Tsum Tsum, but they wanted to differentiate from the previous Tsum Tsum game by adding more excitement.

This is when they came up with the idea of the Battle system. We were chosen as a partner due to our huge success with Monster Strike, which at its core is a co-op game.

Other than the Tsum Tsums themselves, how did you set out to make the Marvel world shine through in this title?

Defeating super villains as Marvel heroes in Battle mode realises the world of Marvel. This allows us to shine a spotlight on the Marvel brand in the game.

We were chosen as a partner due to our huge success with Monster Strike, which at its core is a co-op game.

The planets for the stages were also designed with Marvel locations in mind.

For example, there are planets shaped like S.H.I.E.L.D., New York and Asgard.

By featuring these locations, we want to bring out the cute but also cool in Marvel Tsum Tsum through our unique designs.

Tsum Tsum has truly global appeal, but what differing approaches will you be taking for launches in Western and Asian territories?

In the Western world, generally more cool and stylish things are popular, while Asian countries like the cute factor.

We will emphasise a different aspect of Marvel Tsum Tsum depending on the market to appeal to both audiences.

When did Disney first approach you with regards to the project and how long has it been in development?

After we joined the project, it took eight months for the game to first launch in Japan.

The entire project started a year before the launch in Japan.

Marvel Tsum Tsum is currently available, but only in select territories. What is the strategy here, and when will it be available worldwide?

We wanted to bring Marvel Tsum Tsum to the US first, since that is where Marvel fans are most passionate. We have plans to launch worldwide.

In the US, comics for Marvel Tsum Tsum have been on sale from August.

Part of our media mix plan was to launch in the US first, due to the number of passionate Marvel fans in the country. We wanted to put the game in their hands as soon as possible.

In the past, Marvel franchises have had more of an association with core gaming. How will you make sure Marvel Tsum Tsum appeals across demographics?

Our aim is to be the casual game that existing Marvel gamers pick up.

We want to be the first option for them when they think of puzzle games or casual games.

Do you feel that the Marvel audience has shifted to the mainstream since its box office dominance, and is its realisation in Tsum Tsum form a reflection of this?

Yes, we feel more and more members of the mainstream audience are becoming Marvel fans these days.

Mobile games are a part of people’s daily lives, and play a crucial role in fostering IP brands.

Marvel Tsum Tsum is friendly to both core fans of Marvel comics and casual mainstream fans.

The Tsum Tsum character designs originated in mobile games, and are now a key pillar of Disney's merchandising. Do you see the role of mobile games as innovators and tastemakers continuing to grow?

We believe that mobile games are becoming a part of people’s daily lives as they play a crucial role in fostering IP brands.

Compared to other vehicles, the satisfaction that someone can gain by playing games is quite high.

Add in the fact that smartphones are held by many players and this makes mobile games a great touch point for grabbing mind share.

However, due to the ease of access of the platform, there is a lot of competition in the market, which raises the bar to success.

In this sense, does the game's existence in parallel with a toy line lessen the pressure for it to be profitable in and of itself?