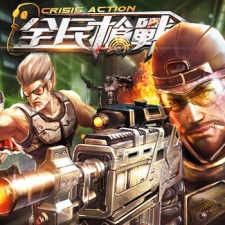 eSports are massive on PC, but can this success be replicated on mobile?

Vainglory developer Super Evil Megacorp's recent $26 million investment, along with the news of its tactical partnerships with China’s Giant Interactive and Korea’s OnGamesNet, has boosted belief in mobile eSports - and particularly highlighted the potential in Asia.

But while Super Evil makes the push from west to east, Chinese developer Hero Entertainment is looking to head in the opposite direction with its Counter Strike-inspired Crisis Action, which it's looking to localise and culturalise for North America and Europe.

With the game currently boasting 10 million daily active users, $20 million in monthly revenue, and offering eSports prizes for Taiwan totalling more than $1.5 million, what are the plans for the western launch?

And how difficult is the east-west localisation process?

We got in touch with Kolia Zhou, Hero Entertainment's Marketing Director, to get an idea of what a large undertaking localisation can be.

We also discussed differing regional attitudes to mobile gaming, the future of eSports, and the challenges his team has faced so far.

Zhou begins by describing Crisis Action as “a real multiplayer eSports FPS game on mobile devices,” and hopes that it can do for mobile gamers what classic shooters Counter Strike and Cross Fire did for PC gamers.

It may seem like it's aiming for a hardcore niche, at least in mobile terms, but Zhou maintains that a significant market for hardcore games is emerging out of the crowded mobile marketplace.

“People want more and more different and hardcore mobile games. Smartphones allow developers to create more beautiful and hard games, and gamers are also changing because of this.”

The figures certainly back this point up, too: “our users have stayed active since its launch in China two years ago and we still maintain a high DAU and pay ratio,” says Zhou.

However, such are the differing attitudes of western gamers, Zhou argues that success in China has almost no bearing on performance in western territories.

In the east, gamers will accept western cultures easily.

“I believe that the biggest difference between western and eastern marketplace is the acceptance of culture,” he says.

“If we bring a 100 percent Eastern game to west, most people will ignore it without doing any deep research or even trying it.”

“But in the east, gamers will accept western cultures easily, so it makes it much easier for western game companies to conquer eastern markets.”

This is where localisation becomes really important, and the struggles start coming in: different aesthetic values, different approaches to community management, different attitudes to monetisation.

“90 percent of gamers will decide to play a game or not based on first sight,” he says.

“Our graphics perform well in the greater China region, but after some investigation of western games, we decided to redesign the characters.”

“It takes great courage for a popular game to do this, because it already succeeded in many areas.”

Zhou also talks of redefining its customer support team to meet western standards: “This team not only aims to answer users' questions or bug reports, but also aims to build a community where gamers could create their own teams and share their experiences [using YouTube and Twitch].”

As for monetisation differences, Hero Entertainment is opting to find out firsthand.

“We will publish a closed beta in North America first, and then decide how to change the monetisation techniques,” says Zhou.

“We hope we can have enough daily active users in western markets, then we could analyze the statistics and decide what to change step by step,” he goes on.

“We will concentrate more on the user experience than income in the first period. All-in-all, it is a complete change for us,” he concludes.

However, for all these differences, it's interesting to hear that Zhou believes there's something more universal about western and eastern gamers' attitudes to eSports and hardcore experiences on mobile.

“I think there is no difference [between east and west],” he tells us. “The key point is mobile game developers should try everything to meet gamers' needs and make them excited.”

The age of eSports

With this is mind, then, it's no surprise that Zhou is incredibly enthusiastic about the potential of mobile eSports, and their ability to succeed all over the world.

“It has great potential, but many challenges still exist. For example, mobile gamers would like to spend less time than on PC, so we have to control the PVP time and reduce some fun game features,” he says.

“And there are so many mobile devices in the market, it’s very hard to satisfy each one of them. But I do believe that the mobile eSports age is coming, and we are trying to be one of the best.”

Zhou says we can anticipate a North American launch “in the next three months,” so we'll soon see whether Crisis Action can live up to Hero Entertainment's global eSports ambition.