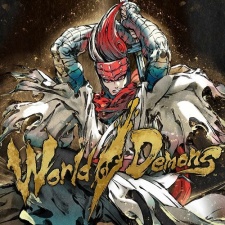 This week, we spoke to PlatinumGames director Ryoya Sakabe and producer Koji Tanaka about how World of Demons was constructed from a previously unreleased mobile game and the struggle of finding a balance in gameplay.

PocketGamer.biz: Where did the initial idea for World of Demons come from?

Ryoya Sakabe: In the past, PlatinumGames worked on a smartphone game that was the predecessor to this game, but we weren’t able to release it.

I thought we should avoid social game elements and instead focus on action, which is PlatinumGames’ strength.

Sometime after that, I heard an internal discussion about using what we had worked on as the basis of a new game for an exclusive release on Apple Arcade.

Since we were going to release it for a subscription service on a smartphone, Ithought we should avoid social game elements and instead focus on action, which is PlatinumGames’ strength.

With that in mind, we started production on World of Demons.

Koji Tanaka: It’s hard to say exactly, but I think it took around 18 months. However, if you include the initial plan, you could add a few more years to that.

As for the number of people working on the game, it fluctuated during various phases of development but there were about 50 team members maximum.

Sakabe: When it came to the design, we already had a foundation, so it was essentially a matter of strengthening that foundation. So, while there was some adapting to do, there weren’t any difficulties on that front.

The problem was deciding how to handle the action and level design. We always had a concept for action that would allow the player to summon and use a lot of yōkai, but we had to work very hard at realising that concept in a way that would be fun and balancing it to keep it fun as you played through the game.

We already had a foundation, so it was essentially a matter of strengthening that foundation.

Initially, you were able to just keep summoning yōkai continuously, but that meant you could beat the game only by doing that.

Right up until the final stages of development, we struggled with finding the proper balance that would be the most enjoyable for players.

And of course, it wasn’t just my work, but the work of the whole team and help from the veterans at PlatinumGames that made World of Demons what it is.

Sakabe: I gave it my all right up until the end, but I still can’t say I’m perfectly satisfied.

But as far as releasing something I believe in, I can say I was confident once the game design settled into its final form. I’d say that was about six months before master submission.

In other words, you might say I wasn’t happy until then!

Tanaka: We plan to fix bugs and comply with iOS updates, but don’t have any plans for additional content right now.

Sakabe: It really makes me happy to see people say they’re enjoying the game, and it’s really encouraging too.

I also know there’s room for improvement and some problems that players have made me aware of, so I want to keep that in mind when working on the next project.