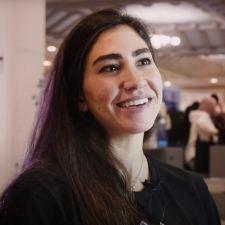 Pocket Gamer Connects Jordan – our most recent Pocket Gamer event, taking what we do to a live audience on a global stage – was bigger and better than ever – double the size of our last Jordan show in 2019 in fact. Across two amazing days, 1,400 games industry professionals from all around the globe shared future-gazing insight and formed hundreds of new connections.

During PGC Jordan we spoke with some of the industry’s leading companies and influential attendees to talk about what they are currently working on, what lies ahead, and what it is like working in one of the most vibrant and upcoming gaming markets in the world.

At the show Diala Deeb, the PR, marketing and communications manager for Babil Games spoke with our very own James Gilmour at the event about their work.

Babil Games is a mobile gaming publisher focused on the MENA region, taking on games titles from around the world and localising them specifically for MENA audiences. This includes not only changing languages, but also spreads to the careful management of in-game assets all of which are fine-tuned and tweaked to better present the game to a new audience with a different culture and mindset.

This level of translation and adaptation is an art in itself, requiring not only a great understanding of games and their inner workings but also a wealth of knowledge of cultures and language from all across the region.

Certain written phrases need to be removed or amended due to having completely different meanings and interpretations when exported. And even what a game character is wearing can cause confusion or offence when presented to a new audience.

Employ the experts, reap the rewards

The reasons to go to the trouble of adapting your game to better suit an audience are manyfold. Saudi Arabia, the UAE and across the Gulf you’ll find some of the most passionate and committed gamers. These are a lucrative target audience for developers and publishers who will happily spend above average sums to stay part of a game that they love. Gaming and spending money on entertainment and the things that they love truly go hand in hand all across the region.

And in a part of the world with so much earning potential it’s no surprise that Babil themselves are moving into games development alongside their own work adapting and releasing other developers' games.

And after fine-tuning the game, Babil will similarly tailor a game’s release to the market, ensuring that its marketing strategy puts the games into the right places, with the right influencers and attracts the right audience of downloads that can later be monetized.

And while MENA is indeed a primary focus at present, Babil are expanding, also publishing titles around the world too.

Find out more about Babil Games here. And get all the action from PGC Jordan right here.