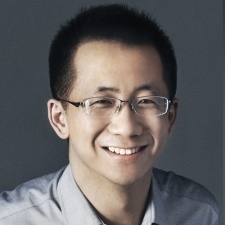 ByteDance co-founder and CEO Zhang Yiming has revealed that he will leave the position by the end of 2021.

Announced via an internal letter to employees (then via a blog post on the official website), fellow co-founder and HR head Liang Rubo will take over as the new CEO.

Both will work alongside one another over the next six months to transition the role across.

ByteDance was founded in 2012 and has expanded heavily into the video game sector over the last few years - notably, launching a mobile games store and publishing arm in November 2020.

"There are still many things that we need to improve, and I think someone else can better drive progress through areas like improved daily management," said Yiming via the letter to ByteDance employees.

"The truth is, I lack some of the skills that make an ideal manager. I'm more interested in analysing organisational and market principles, and leveraging these theories to further reduce management work, rather than actually managing people."

On the company's success with the social phenomenon that is TikTok, Yiming explained that he's not "very social" and much prefers "solitary activities". This is why he expects Rubo to be a better fit for the role at this time.

After departing the position, Yiming will remain at ByteDance and begin to look at the company's long-term strategy, culture, and social responsibility.