One week on, investors add $6 billion to Nintendo and DeNA's value 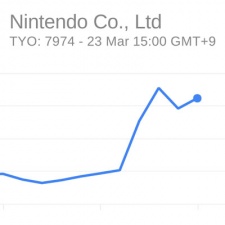 One week one from Nintendo's shock announcement, plenty of commentators have had their opportunity to say Yay or Nay about its decision to start making mobile games.

The most unambiguous reaction has come from Japanese investors, however.

A simple check of the companies' share price before and after demonstrates that both have seen a considerable rise in their value.

Given their pre-announcement market capitalisation, that's added $5 billion to Nintendo's value and $805 million to DeNA's value.