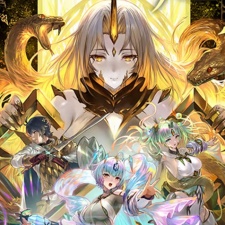 With the release of its Version 7.0.0 update, the latest story arc of Fire Emblem Heroes kicked off yesterday (7 December 2022) alongside in-game celebrations, the release of new gacha characters and more.

Heroes is a collaborative effort between Nintendo, DeNA and Intelligent Systems – the latter of whom also develops the main series Fire Emblem games for console – and as Nintendo’s most successful mobile title by revenue, the title has outlasted a number of its other mobile ventures.

The latest big update to Fire Emblem Heroes’ story mode includes the introduction of Book 7, which has players join the goddess Seiðr of Vanaheimr in battle against Gullveig, a seer who can manipulate time. The story is set to take place across the past, present and future, and if the trend of prior Books continues, Book 7 will see the release of many new chapters in smaller updates until late 2023.

The majority of new characters in the update come from a 3DS era title, Fire Emblem Fates, such as the eccentric mage Ophelia. At the time of Heroes’ release in 2017, Fates was the latest main series game in the franchise.

In its first year, Fire Emblem Heroes generated almost $300 million with 59 percent of its revenue coming from Japanese players. Jumping ahead to February 2022 – the game’s fifth anniversary – Heroes accumulated more than $959 million across 17.6 million lifetime installs. In the months since, it has surpassed $1 billion and accounts for 54.5 percent of Nintendo’s mobile revenue.

As well as gacha mechanics for unlocking characters, the game introduced a subscription service in 2020 to further boost revenue, but only last week Nintendo revealed that it is using mobile games to introduce players to its IPs more than it is for mobile revenue. Between April and September 2022, the company earned $169 million from mobile versus $4.5 billion from the Switch.

Whatever happened to Fire Emblem Heroes?