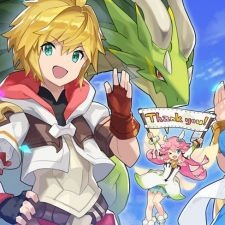 Nintendo’s Dragalia Lost has officially closed down today, ending its services at 06:00 GMT on 30 November 2022.

Given the title’s prestige as Nintendo’s first and (as of writing) only original mobile IP, it only seems right to give the game a proper sendoff – highlighting the journey, the milestones, the highs and the lows of Dragalia Lost since its 2018 launch.

Nintendo and Cygames first launched action RPG Dragalia Lost on mobile on 28 September 2018 as a free-to-play game revolving around Alberia’s seventh prince and his ability to transform into dragons. In just over two months, the original IP saw player spending of over $50 million between iOS and Android. It was only available in Japan, the US, Hong Kong, Taiwan and Macau at the time.

In February 2019, access to Dragalia Lost expanded with its launch in the UK, Ireland, Canada, Australia, Singapore and New Zealand. It was then considered one of Nintendo’s top earners. However, one month later it was revealed that Nintendo had requested its development partners not prioritise player spending in its mobile games, and Cygames’ parent company CyberAgent was already commenting on Dragalia's failure to meet expectations.

As of the game’s first anniversary, Dragalia Lost crossed the $100 million milestone and accumulated more than 3 million downloads worldwide, but one year later the game was still on the approach to $150 million in worldwide revenue. Notably, half of the game’s earnings at the time came from Japanese players.

Nintendo announced in March 2022 that Dragalia Lost would be shut down after the conclusion of its main campaign, which was scheduled for July. Of course, the game ultimately survived beyond July and was able to celebrate its fourth anniversary in September with in-game bonuses, artwork and more, though overcast with the looming November closing date.

Nintendo recently announced another significant change in its mobile catalogue, revealing that gacha mechanics were to be removed from Mario Kart Tour.