Celebrations include in-game bonuses, artwork on Twitter and more 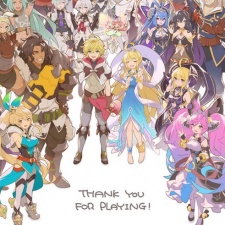 Nintendo’s mobile action RPG Dragalia Lost has been celebrating its fourth anniversary with in-game bonuses, artwork and more, ahead of the game shutting down this November.

As Nintendo’s first mobile-exclusive IP, Dragalia Lost launched four years ago as a title developed by Cygames and for a time was positioned as its second biggest mobile earner behind Fire Emblem Heroes.

This is the end

To celebrate Dragalia Lost’s fourth anniversary and end to the main story, Nintendo has released the game’s ending credits online and the Dragalia Lost Twitter account has been releasing new artwork relating to the game.

"Thank you for playing Dragalia Lost's main campaign to its conclusion," the account tweeted.

In-game, meanwhile, players can currently receive wyrmite, diamantium and other gifts as an anniversary celebration. Certain campaign chapters are also featuring double drops and only need half the usual stamina to play.

Up to its first anniversary, Dragalia Lost brought in $106 million in revenue with 57 per cent of its earnings coming from Japan. The US and Hong Kong came second and third for spending, and iOS players globally contributed $62 million – the other $44 million accounted for by Android players.

At the time of the second anniversary, we at PG.biz spoke with Dragalia Lost game director Yuji Okada about live ops, customer support and maintaining an active player base. Two years in, Dragalia Lost had neared $150 million in worldwide revenue and came close to 4 million installs.

However, the game had been underperforming for some time according to CyberAgent president Susumu Fujita, and in early 2022 Nintendo announced that it would be closing down Dragalia Lost, still the company’s only mobile-original IP. This also marks the second of Nintendo’s mobile titles to be shut down, with Dr Mario World having been the first.

Dragalia Lost’s main story concluded this July, ahead of servers closing on November 30 2022.