eSports will be a medal event at the 2022 Asian Games

Could mobile play a part? 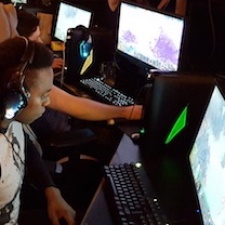 The 2022 Asian Games will host eSports as a medal event for the first time.

The move is the result of a partnership between the Olympic Council of Asia (OCA) and Alibaba division Alisports.

Competitive gaming has already been added to the OCA’s fifth Asian Indoor and Martial Arts Games (AIMAG) event taking place in Ashgabat, Turkmenistan this September as a demonstration sport.

Similarly, it will also feature in the 18th Asian Games in 2018 as a demonstration sport.

eSports won’t be classed as an official medal sport until the 2022 event, however.

The Asian Games is one of the world's largest sporting events. The 2014 Asian Games in South Korea hosted over 9,000 atheletes in 439 events across 36 sports.

“The Olympic Council of Asia has constantly been committed to the heritage, development and improvement of Asian sports, and we are extremely pleased about the strategic partnership with Alisports,” said OCA President HE Sheikh Ahmad Al Fahad Al Sabah.

“We look forward to further collaboration with Alisports in regards to digital sports concepts along with sporting events. We are sure that the extensive organising capabilities of Alisports, and their experience in eSports, will assist the OCA in developing all sports.”

It's not clear which games will be played during the 2022 Asian Games at present.

Titles set to be contested during the AIMAG in September 2017 include FIFA 2017, and titles in the MOBA and RTA (Real-time Attack) genres.

This could mean other titles such as League of Legends, DOTA 2 and StarCraft 2 could be played.

There’s no word on what platforms will be represented, though no doubt PC will play a central role.

Mobile could play a part, however. Tencent’s Honor of Kings, developed by Timi, is a MOBA that has become one of China’s top grossing mobile games.

The title is thought to have had more than 50 million daily active users at the end of 2016, and by 2022 could be a serious contender for a medal sport at the Asian Games.