Australia and New Zealand games markets worth combined $3.1 billion in 2018 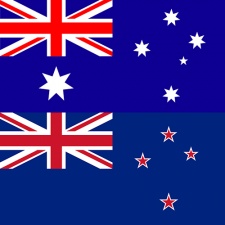 Consumers in Australia (flag top in picture) and New Zealand (flag bottom in picture) spent a combined $3.1 billion on video games in 2018.

That's according to new research published by local trade body Interactive Games and Entertainment Association (IGEA), which reports that Australia's market was worth AU$4bn ($2.8bn) in 2018 - an increase of 25 per cent year-on-year.

Mobile, which is housed under digital sales, was said to be one of the largest categories, with revenue growing by 11 per cent.

“The excitement for video games is continuing to grow, with phenomenal consumer sales in 2018,” IGEA CEO Ron Curry said.

“Australia continues to experience video games sales growth, in line with trends similarly experienced by other countries, including the USA and the UK."

"The fact that the industry has rocketed through the half-billion dollar mark is evidence of an industry in great shape. New Zealanders’ are clearly engaged in playing games both physically and digitally, and they continue to find ways to upgrade and extend the life of their games and hardware, evidenced by the clear growth in console accessories sales."