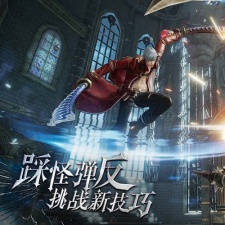 Capcom and Yunchang Games' Devil May Cry: Pinnacle of Combat has accumulated more than 500,000 pre-registrations.

The milestone was surpassed on the game's official website (via Google Translate), which also features two new trailers showcasing protagonist Dante and a variety of weapons that will be available in-game.

Yunchang Games snagged the Devil May Cry license in late 2017, and has been developing Pinnacle of Combat since. It was scheduled for a limited trial in China this year, but this has since been delayed to 2020. No Western release date has been announced.

While Yunchang Games is the lead developer, Capcom is said to be taking an active role in overseeing its development. The game will feature classic characters, weapons and bosses featured throughout the 18-year old series, with touch controls seemingly being the main option for combat.

Capcom has been fairly quiet on the mobile game front for a while now, especially in the Western world. It last made headlines when its Capcom Vancouver-developed title Puzzle Fighter was shut down in April 2018, shortly before the entire studio was shuttered in September 2018.