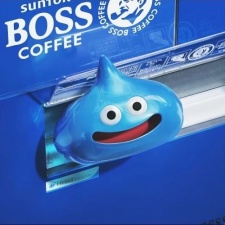 The two firms announced (via Google Translate) that 14,000 of the Suntory's vending machines will be accessible for users to recover health and magic points, alongside the exclusive new missions. These can be found nationwide across Japan as of January 27th, 2020.

Niantic offered a similar deal in the early life of Pokemon GO when the firm partnered with Starbucks to turn over 7,800 stores into PokeStops.

Players that purchase products from the vending machines can also claim a mobile wallpaper via a QR code. Furthermore, they can be entered into a lottery that can result in a pre-paid card with ¥300 ($2.75).

Square Enix confirmed that the AR game went on to surpass five million installs within its first week.

Dragon Quest Walk launched in Japan back in September on iOS and Android, with no Western release being announced as of writing.

The Japanese firm recently teased a new Kingdom Hearts game that is due to launch on mobile in Spring 2020.