Former Wii U title now making its way to Switch 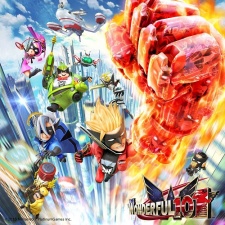 Update (2): The Wonderful 101: Remastered from PlatinumGames has smashed its initial goal of $50,000 by crowdfunding £1.7 million ($2.2 million) to bring the game to Nintendo Switch.

"We at PlatinumGames want to express our heartfelt appreciation for all the warm wishes and support for our Kickstarter for The Wonderful 101: Remastered," wrote PlatinumGames via Twitter.

"We couldn’t have done it without all of you!"

The Wonderful 101: Remastered will launch physically on May 19th in North America before making its way to Europe on May 22nd, 2020.

Update (1): PlatinumGames' The Wonderful 101: Remastered has surpassed $2 million since launching its campaign at the beginning of February.

At the time of writing, the Kickstarter campaign stands at £1.62 million ($2.1 million) with less than 10 hours before completion.

During PAX East, PlatinumGames head producer Atsushi Inaba claimed the campaign "was not for funding at all" and was "more about gauging interest" in the title.

Original Story: PlatinumGames' The Wonderful 101: Remastered has raised over $1 million since launching on Kickstarter on February 3rd 2020.

The fundraiser set a goal of $250,000 to bring the former Wii U title to Nintendo Switch, Steam and PlayStation 4. That amount was surpassed within the first four hours.

As a result, the developer unveiled a further two stretch goals including a new Time Attack mode (which has already been achieved) and a "brand new side-scrolling adventure starring a young hero" at $1.5 million.

Backers can gain access to digital copies of the game on release as well as lots of other goodies. One of the more unusual rewards for pledging will see PlatinumGames founder and director Hideki Kamiya block you on Twitter.

The Wonderful 101 is an action-adventure game that sees players controlling a legion of superheroes during an intergalactic war between Earth and the alien Geathjerk Federation.

Though the game received positive reviews, sales on the Wii U underperformed, hence giving some reason as to why Nintendo chose not to port the game to Switch itself.

Subsequently, The Wonderful 101: Remastered will launch on Switch in April 2020 with further releases for other platforms to be announced later.

Tencent recently invested an undisclosed sum in PlatinumGames, though the studio is expected to remain independent.