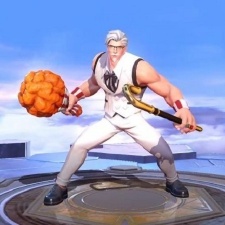 Update: Tencent has confirmed that the KFC partnership that allows players to play as Colonel Sanders in Arena of Valor will eventually arrive in all territories.

"The Colonel Sanders Ormarr is currently available in Thailand and Taiwan region," said an Arena of Valor spokesperson.

"As KFC in each territory operates as a separate entity from one another, Garena, AoV’s main publisher in Southeast Asia region, and AoV developer, Tencent's TiMi Studios, are working on bringing the iconic Colonel Sanders Ormarr to all territories that AoV is officially published in."

Original Story: Tencent's MOBA Arena of Valor has entered into a partnership with KFC Gaming that gives players the chance to unlock Colonel Sanders by purchasing a meal at the fast-food restaurant in Taiwan.

The limited-time deal can be found on a Taiwanese KFC website, however was brought to light by Resident Evil: Resistance's director Al Yang (via Twitter).

Anyone that purchases a meal at KFC worth at least NT$299 ($10) will be offered a 40 per cent chance of unlocking the Colonel.

While details are not clear of how the mascot will be accessed in-game, we can take an educated guess and assume it will be via a QR code or something similar.

KFC unveiled its games division in 2018 and has been making several deals since. Most prominently, the unit partnered with Call of Duty for a KFC Royale event as well as releasing its own "delicious" dating simulator, I Love You, Colonel Sanders!

PocketGamer.biz has reached out to Tencent for further details surrounding the offer and whether other territories will receive the content in future.

More recently, KFC Gaming renewed a deal with Kairos Esports that will see both run a campaign for its Esports Performance Burger. From this, a mockumentary has been commissioned to help promote its new vegan burger.