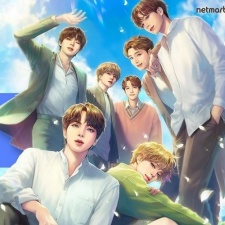 The first two official BTS mobile games - BTS World and BTS Universe Story - have generated near to $50 million in combined lifetime revenue, according to Sensor Tower.

Launched in June 2019, BTS World has accumulated approximately $48.5 million globally on mobile - making up the bulk of the number - however BTS Universe Story only launched last week and contributed a further $310,000. Both games were developed by South Korean developer Netmarble.

BTS World's player spending from South Korea accounted for the largest portion at $7.7 million, or 23 per cent of the revenue. The US then followed in second and Japan in third. App Store users edged out those on Google Play at a 54 over 46 revenue share. Revenue stands at a respectable $4.1 per download.

On the other hand, BTS Universe Story was dominated by the US, accumulating $132,000 (43 per cent) of overall revenue, showing the continued growth of the "BTS Army" in Western territories. Japan and South Korea then secured second and third spots respectively.

Players on the App Store contributed 59 per cent of player spending, while Google Play made up the remaining 41 per cent.

When it comes to downloads, BTS World has amassed close to 12 million installs with 69 per cent of that number arriving from Google Play. The App Store then claimed the remaining 31 per cent.

Indonesia showed its support for the South Korean boy band by picking up 1.5 million downloads, 13 per cent of the total. Following this was the US at second and Brazil at third.

BTS Universe Story generated over 2.7 million global downloads in its first six days of being live. Google Play again accounted for the larger portion at 71 per cent, while the App Store secured the final 29 per cent.

Similarly, the top three countries were identical to BTS World, with Indonesia claiming the top spot at 363,000 installs or 13.4 per cent of the overall figure.

Netmarble has found a lot of success this year with its mobile RPG adventure game The Seven Deadly Sins: Grand Cross surpassing three million downloads in its first week of release.