Pokémon Legends: Arceus given spotlight too 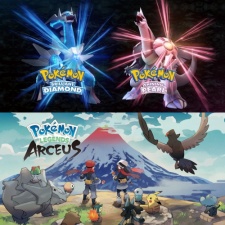 Debuted in a new Pokémon Presents video presentation, Pokémon Brilliant Diamond and Shining Pearl are remakes of the 2006 entries to the long-running series. Set in the Sinnoh region, the game will feature new graphics and include several "revamped" and new features.

For one, the Grand Underground will return, where players can go underground to collect fossils and build bases. New customisation features have been added to the game, allowing players to change the way their characters are dressed and add effects to Pokéballs.

Players will also now be able to have any caught Pokémon follow behind them to accompany them on their adventure, something that was available before but has now been expanded upon.

The remainder of the stream was dedicated to Pokémon Legends: Arceus, a new entry that looks to tackle the series from an open-world perspective.

Set in the Hisui region, the precursor to Sinnoh, players are tasked with completing the very first Pokédex. This will be done by exploring the land and completing assignments for the Survey Corps, such as collecting items and gathering information on wild Pokémon.

The new game will offer lots of new features never seen before in a Pokémon game. Players are now vulnerable to damage and must take precautions not to get hit by the attacks of wild Pokémon, such as dodge rolling. By building a base camp, you are then able to craft items like Pokéballs and heal.

New Pokémon will also be added to the game, such as Wyrdeer and Basculegion, with the addition of regional variants of Pokémon, such as Growlithe and Braviary. Pokémon Legends: Arceus is scheduled to launch on January 28th, 2022.

Pokémon Home will provide support to the three upcoming titles, however, ranked battles will not be available in the new games but will remain available on Pokémon Sword and Shield. This is expected to go live sometime in 2022.

The full stream can be watched below:

Pokémon GO remains as popular as ever with a recent Pokémon Go fest generating over $20 million over two days.