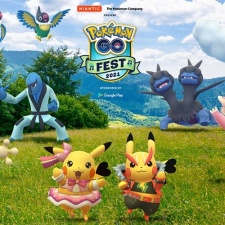 Pokémon GO Fest 2021 accumulated close to $21 million in revenue over the two-day event, according to Sensor Tower data.

The fifth annual Pokémon GO Fest event took place from July 17th to 18th with fans once again gathering both in-person and virtually to catch numerous of the Pocket Monsters. So much, in fact, that developer Niantic confirmed that 1.5 billion Pokémon were caught across the weekend.

Pokémon GO generated $11 million on July 17th before going on to pick up another $9.8 million on July 18th, with player spending noted as been 3.5 times higher than compared to regular weekends.

Additionally, it was the location-based game's most lucrative day since February 20th, 2021 when it earned 11.1 million, and one of its highest in its five-year history.

Quarter of a billion

Alongside the 1.5 billion Pokémon caught over the weekend, players also spun over 900 million PokéStops, completed over 23 million raids and collectively walked over 125 million kilometres.

It was further revealed that Pokémon GO has accumulated $731.3 million from global player spending across the App Store and Google Play in 2021 alone.

Last month, Pokémon GO was confirmed to have earned $5 billion from player spending within five years.

One person who was likely to have taken part in the event was Nintendo veteran games designer Shigeru Miyamoto, who recently admitted that he is obsessed with Pokémon GO.

The game has been showing up in all varieties of places. For one, several Pokémon were spotted at one of the largest US military bases in Afghanistan.