Another $1 billion in seven months 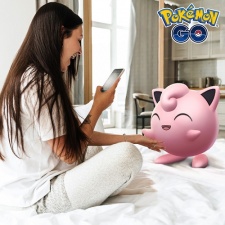 Pokémon GO has accumulated $5 billion from player spending within five years, according to Sensor Tower.

Launched on July 6th, 2016, the worldwide catch 'em all is still showing no signs of slowing down after previously reaching the $4 billion milestone in November 2020. This means that Pokémon GO has earned another $1 billion in seven months flat, as well as an average of $1 billion each year.

Niantic's prized possession has made $641.6 million in 2021 already, with Dragon Quest Walk from Square Enix the closest competitor in the location-based AR genre at $261 million.

"The COVID-19 pandemic and lockdowns could have represented a huge challenge for a title focused on players being outside, but the addition of more stay-at-home functionality to keep users playing has paid off, with 2020 revenue hitting record highs," wrote Sensor Tower mobile insights strategist (and former PG.biz editor) Craig Chapple.

As it has throughout its entire lifecycle, the US lead player spending at $1.9 billion, or 36.6 per cent of the total figure. Japan grabbed second spot at 32 per cent before Germany secured third position with 5.4 per cent.

Those on Google Play accounted for the biggest portion of revenue at $2.7 billion (52.8 per cent), while the App Store grabbed the remaining $2.4 billion (47.2 per cent).

Pokémon GO has been downloaded 632 million times during its five-year period, with the US again ranking first at 115.5 million, or 18.3 per cent of the overall number. Brazil and India followed in second and third respectively.

Niantic recently revealed its post-pandemic plans for Pokémon GO, giving an idea of what the game will look like once lockdowns around the world begin to lift.

The San Francisco-based company has already set out its next major project by partnering with Hasbro on Transformers: Heavy Metal, a new augmented reality mobile game.