Heading to iOS and Android later this year 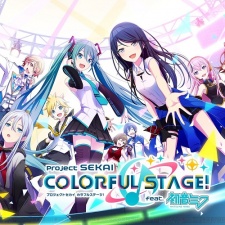 Sega developed the game in collaboration with Colorful Palette and will be the first Hatsune Miku game to come to mobile.

The new game was revealed as part of a celebration commemorating the 14th anniversary of the creation of Hatsune Miku.

Hatsune Miku: Colorful Stage! will feature virtual live performances from Hatsune Miku and five original bands with each band will including an original story and unique style. The game is likely to be similar to Craft Egg’s Bang Dream! Girls Band Party.

Hatsune Miku is the world’s most popular voice synthesizer developed and owned by Crypton Future Media and has been featured in over 100,000 songs and performed multiple sold-out 3D concerts worldwide.

The game is already available in Japan under the name "Project Sekai Colorful Stage! Feat. Hatsune Miku." The title has proved a success and surpassed five million downloads so far.

Multiple Hatsune Miku rhythm games have been released on various platforms in the past as part of the Project Diva series.

Hatsune Miku: Colorful Stage! is scheduled to be globally released on Android and iOS devices later this year.

"I've been a fan of Hatsune Miku from the very start, and have observed the global phenomenon of the growth of her fanbase and community," said Sega producer Shingo Kosuge.

"We've created a new immersive experience with Hatsune Miku offering her fans, as well as fans of anime and Japanese culture, to engage and experience her music. It will be a thrill for us to watch how people respond to the musical performances and fun gameplay challenges that we're creating."

Earlier this year Sega debuted several new Sonic the Hedgehog games and partnerships that will be released throughout the rest of 2021 and 2022.