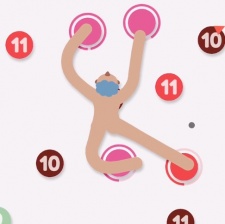 Next up in our retrospective on the Big Indie Pitch's global indie tour is a trip to the Czech Republic, as we took to the floor of the White Nights conference in order to host our first ever Big Indie Pitch in Prague.

This pitch was full of fresh ideas, and also included one of the biggest suprises in pitch history, as we saw our Very Big Indie Pitch at Pocket Gamer Connects London winner return to take the crown for a record-setting second time in a row. They even did it with an entirely different game.

And that game was...

Nood Climbrs is an endless, physics-based, runner for mobile devices inspired by sport climbing where you play as a naked, noodle-limbed humanoid travelling on a colourful climbing wall.

On the ascent, you collect and customise your character with hilariously coloured thongs, bras, hairstyles, tattoos and all sorts of risque accessories.

All in all, Nood Climbrs offers players a massive amount of replay-ability through its unique level-design and casual pick up and play gameplay.

Nood Climbrs may still be in the early stages of development, but it’s already one to keep your eyes on.

Nood Climbrs impressed the judges and was a worthy winner. You can find out more about developer FINIFUGU && friends in our interview with the lead developer from June.

However, Nood Climbrs wasn't the only game that drew the judges' praise. You can read about all the games which pitched in Prague on our sister site PocketGamer.co.uk.

Who knows? One of the top three there could be taking away a prize at The Big Indie Awards 2018, in association with G-STAR, this November.

Entries must be mobile, portable (including Switch), mobile VR or AR games. Teams that enter will need at least one member with a valid passport who could travel to South Korea between November 15th to 17th, 2018. Please send other questions to the award coordinator at support@bigindieawards.com.