We speak to FINIFUGU && friends, the first ever two time champion of The Big Indie Pitch 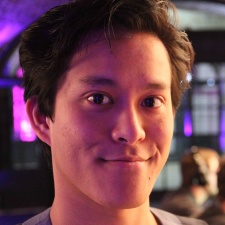 The event gives indies four minutes to pitch their games to a panel of press, publishers and industry pundits. The judges then pick three winners and everybody gets valuable feedback. In 2018, we're proud to have G-STAR on board as season sponsor of our Big Indie Pitch events.

Today, we're speaking to Jai Bunnag from FINIFUGU && friends, who submitted Too Many Cooks to The Very Big Indie Pitch at Pocket Gamer Connects London 2018, and Nood Climbrs to The Big Indie Pitch at White Nights in Prague 2018, and walked away as champion at both pitches.

In turn, this made FINIFUGU && friends not only the first ever two time champion, but also the first ever developer to retain the Big Indie Pitch crown.

Our weird name represents us rather well - FINIFUGU comes from the English word finifugal describing a person who avoids ending something. The '&& friends' functions like the music industry's 'feat.' label. For example Too Many Cooks would be by FINIFUGU && Oliver Wegmuller (who has done all music plus sound for all FINIFUGU games to date).

We like designing novel interactions and marketing scenarios for a wide audience to push the limits of interactive mobile entertainment. We're pretty bad at designing games that fit into existing genres, so our games are and will likely continue to be some varying level of 'weird'. It keeps things exciting.

FINIFUGU has so far been rather unintentionally multidisciplinary and international - Jai, from Thailand, originally came from an architecture background having studied at the Rhode Island School of Design while Chris, from Hong Kong, was studying maths and finance at Kings College.

Our previous collaborations have included fine artists, writers, illustrators and animators of varying nationalities united by (funnily enough) a general lack of experience in the games sector at the time.

So, it's also probably no surprise that our inspirations come from odd places. For example, Climbrs is heavily inspired by the design of the gorgeous, delicious eclair shop in London - Maitre Choux. The first FINIFUGU project, TACENDA, directly references the Japanese anime Mawaru no Penguindrum and the NYC Metro.

On the other hand, Too Many Cooks exists primarily because we wanted to play Overcooked but lacked controllers, a TV and had more than four friends to entertain. Again, it keeps things exciting.

Through both of the recent pitches, you became not only our first ever two time winner of the Big Indie Pitch, but you also won these back-to-back. As such, tell us a little bit about these two record-breaking projects that you pitched.

Too Many Cooks is a local cooperative party game for three to six (two to eight in future) players (iOS, Android, Amazon etcetera) where your team works together run a restaurant kitchen.

Each player uses their own device to chop, steam and wash their way to victory while sending items back and forth between the team. Each player can assign themselves tools like chopping boards and food crates.

As a team, they will be passing around tools and ingredients while trying to figure out the best way to tackle each gauntlet of orders; featuring iconic foods from around the world!

Too Many Cooks is approachable and cute, with complexity focused on team dynamics. It's a fast-paced team-reliant experience packed into 150s - lots of talking guaranteed! It makes for a great pick-up-and-play game which fits neatly into a family games night, a train/car ride or at an airport.

Nood Climbrs (Big Indie Pitch, White Nights) is an endless, physics-based, runner for mobile devices inspired by sports climbing where you play as a naked, noodle-limbed humanoid travelling on a colourful climbing wall. On the ascent, you collect and customise your character with hilariously coloured thongs, bras, hair styles, tattoos and all sorts of risque accessories.

Through its design roots in sport climbing, Climbrs offers players a great deal of replay-ability with its unique level-design by weaving in paths or competitive, free and directed climbing into one continuous level.

Aside from its simple and oddly charming visual style, this is Climbr's unique selling point of having a single densely polished map where players can freely jump in and out of different types of play rather than the usual strategy of separating them into different modes with the intention to create a physics, infinite-runner, sandbox-hybrid experience.

We're still working on them both! It's hard to say which will finish first but both will definitely be within 2018. Look forward to it!

How hard is it to survive as an Indie developer?

We can't say we're even in the 'surviving zone' yet, but we're quickly shaping up and getting there. We don't have as much experience as other developers and to compensate our survival strategy so far has been to build a mental image of the industry as this cut-throat monster that's only going to get tougher. It sounds extreme but its kept us in check so far!

This means constantly leveraging only our strengths into our projects while readily admitting defeat in others areas. That's why our projects are generally quite weird and different - we're simply not skilled enough to go toe-to-toe with more experienced developers especially in established genres; so we tend to try and create our own targets and markets instead.

This also means working as smartly as possible and not allowing passion to singlehandedly drive our projects. We sorta treat passion and drive as a given when comparing ourselves with other developers!

We're constantly holding ourselves back from getting overly invested in a project before we can confirm its future and survival (and more importantly our survival!) to pre-emptively minimise losses. We tend to bin many great ideas early in development if we anticipate the, being not time-efficient.

Maybe one day we'll have the luxury to indulge though, it sounds really harsh when I describe our work process.

It sounds weird, but we find that confidently grasping and accepting what you've created after its creation helps to orient the whole design and marketing angle.

By the end of the pitches, we were pretty confident that we had correctly identified, focused and pitched around that core aspect of both games that made them unique in the market - now its time to execute!

In fact for Climbrs we originally felt it was too soon to identify that 'something' until developing the pitch and understanding what the game wanted to be.

The pitches are short - a lot shorter and more casual than we had expected. So after the novelty of panicking before a big presentation had worn off in London, I was pretty relaxed and ready to pitch in Prague.

It's actually tonnes of fun once you let yourself relax and just talk.

What do you feel you have gained from these experiences, and what do you still hope to gain?

The pitches helped us identify the strengths and weaknesses of some of our design and business decisions, as well giving a huge morale boost to the team.

The Big Indie Pitches were the first showcases for both our projects, and they revealed to us that we were finally mentally ready and capable of carrying through our momentum through to the completed products.

Also, the prizes are actually well suited for self-publishing indies, and winning them made the self-publishing an option (which we originally ruled out) we're not considering. What a relief!

We still have somehow not talked to anybody from Apple or Google in any of our conferences so far, so working up to that meeting is a pretty big goal right now. We're looking forward to learning how our games might fare in their respective feature-store ecosystems. But, it's possible that we're being avoided.

Honestly, for Too Many Cooks we'd be thrilled if we could just come out of it breaking even. We're doing something that's pretty risky from a publisher's perspective (and from ours) for our first project to boot and really the goal is to just establish ourselves and FINIFUGU as a studio who has successfully been through the whole production process with a unique IP and product.

If all goes well, what we're really excited about is to create more 'digital co-op board games' like Cooks since we believe theirs a huge potential in the mobile space for that. Also, a physical board-game for Cooks and a decent trailer for both games (sorely, sorely needed)

We have quite the phobia of publishing, so the plan was to take the experience from completing Too Many Cooks working with an established publisher and eventually self-publish Climbrs using the prize from the Big Indie Pitch... but since they're being developed along-side one another now it's a race to see which finishes first and informs the other.

Want to show off your exciting new game? We host Big Indie Pitch events throughout the year, so be sure to keep an eye out on our events page for an event near you. And be sure to consider the Big Indie Awards, which take place in Busan, South Korea, in November, in association with our partner G-STAR.