We speak to Airapport, who took away the third place prize at the first ever Big Indie Pitch in Prague 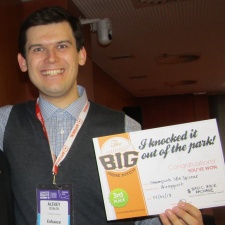 Today, we're speaking to Alexey Izvalov from Airapport, who submited Steampunk Idle Spinner to The Big Indie Pitch at White Nights in Prague 2018 and walked away with the prize for third place.

Alexey Izvalov: I have been inventing games since childhood: the first were strategy board games. I remember, when we were studying Rome and Carthage in history class, I drew a map of an imaginary world with tribes and powers, and imagined the routes of expeditions, wars, rebellions.

Eventually new lands were discovered and I glued another sheet of paper to the current one, thus, expanding the known universe. Later this became tabletop wargames with medieval armies made of modeling clay.

As for video games, I've been a gamer since the early 90s. My mother was teaching computer science at that time, and I spent evenings in her class playing Sim City or Golden Axe. She gave me books on programming, it was GWBasic.

In fact, my first computer program was written on a paper too - having a computer at home was an unreachable dream at that time. But we had a programmable calculator and I learned how to run programs and games on it.

As a student I finally put my hands on Pascal/Delphi and made several strategy games: about tank battles, Rome legions and submarines. My friends enjoyed playing them.

But the technology which let me call myself an “indie game developer” was Flash: that was a wonder in 2010: allowing me to make a game which could be played from a browser by anyone anywhere in the world.

After the third Flash game was released - it was “I Wanna Win!”, a series of minigame puzzle - I decided that we needed a studio name.

For this game I tried to log the whole process. I’m making screencasts while I’m writing code, debugging and drawing, and then I release them as timelapse videos to YouTube.

Originally we were called “Smart Flash Games”, and then, after the transition to mobile, Airapport. As “we”, I mean me and my mother, who helps with project management and game design.

She is a teacher of Math, and I teach computer science now, so in our games we want to introduce something interesting and challenging to people, not just make clones of popular mechanics.

For the Big Indie Pitch I brought my newest game Steampunk Idle Spinner. We started developing it in June 2017, when we thought of combining two of the most popular trends of 2017: spinners and idle games.

But the gameplay grew far more than the simple fusion of these two concepts. The game starts really simple: you have one cogwheel connected to the money-making machine. As you spin the cog, the machine produces coins.

The steampunk setting comes naturally from the main spinning element: cogwheel, but this also reflects my old aspiration to make a steampunk-styled game. In my older games there were zeppelins, and when I was learning how to draw about 5 years ago, I drew steam robots, floating islands and balloons. Now all of these objects are used in my game.

So in Steampunk Idle Spinner you can spend money on engines, balloon pumps, automatic hammers, mines and railroads.

As your contraption grows bigger and bigger, you might want to build a portal and travel to another steampunk world.

Picking steampunk as a setting is prolific, because there are so many sides to it. So, from the first world called Workshop the player can get to the Clockwork City world, where new buildings are unfolded - just like in the “Game of Thrones” opening - and the mechanical sun gives them energy and tax collectors on zeppelins gather money.

Then there is a Floating Islands world: you send Leonardo da Vinci styled planes to explore new sky lands, build windmills and thunder rods, and connect the islands with rail bridges and cable lines. Also in this world you can fight sky pirates and loot them.

So I’m making a game where you can build machines and explore various steampunk, dieselpunk and gaslamp fantasy worlds.

The whole development story is interesting, too. For this game I, for the first time, tried to log the whole process. I’m making screencasts while I’m writing code, debugging and drawing, and then I release them as timelapse videos to YouTube. Such an approach helps me to keep work discipline.

I must admit, I didn’t quit my full-time job to make games. I still teach computer science to students and I also help other games developers through my role in Developer Relations at Enhance, a tech start-up that makes it easy to integrate various mobile SDKs. So, I don’t - and don’t advise others - to burn their bridges while pursuing their dream.

I call the Flash game dev era “the belle epoque”, because then it was really easy to make a game, release it to the portals and make it spread virally.

Many people say that now it’s much more difficult to get your game noticed. I agree, but would add: if you keep the release-and-forget approach. Because now indies can reach success only with the support of the community, and the modern community building tools are better than ever before.

Now indies can reach success only with the support of the community, and the modern community building tools are better than ever before.

When I told you that Steampunk Idle Spinner was made by a team of two, I might as well have said that it was made by the team of 5,000 - this is how many players there are in our Facebook group.

They submit bug reports, share their building ideas, give suggestions on the game’s future features and make translations. I’m so thankful to them. So, everything looks bright when you see that your work is enjoyed by people and that they support you. And this strategy should be picked by modern indies, I think.

It was great/ I definitely like the format when you have four minutes to tell the most essential information about the game in a table talk with judges.

And by providing the actual game I could easily spot the judge’s reaction: I was delighted to see some judges started spinning the cogwheels and stopped playing with their steampunk machine only when I had to move to another table.

This is a great boost in motivation to go on, and the feedback which I received is very valuable. The prize for getting into the top three assures me that once I release the game, I will get valuable support and help get noticed by even more players.

The Steampunk theme is so vast and there are so many settings to be reflected in the game. For example, Captain Nemo’s world of “From the Earth to the Moon” or “Journey to the Center of the Earth”.

I want to release the game once it has five worlds in it and then continue to support and expand it. There are so many ideas and the players in our Facebook group are now voting on what ideas should be implemented first.

My more distant plan is to get back to the development of Strategilization, my mobile turn-based strategy. It will reflect that paper board game which I drew at school.

The Big Indie Pitch heads to Prague and Essex in 2018