Bugbomb Games tell us more about the founding of their studio, the goals, and of course their latest game Gerrrms 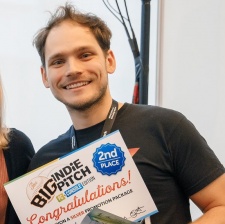 Today, we're speaking to Robert Kujawa from Bugbomb Games, who submitted Gerrrms to The Big Indie Pitch at White Nights Amsterdam 2020 and walked away as runner-up.

Robert Kujawa: We’re a relatively new studio, established in 2019, but we’ve known each other for much longer. Neurodio was the first enterprise we started and worked together in, releasing a relatively successful game: Numbala, which saw its share of success and awards.

Right now there are nine of us, trying to make a mark in the highly-competitive mobile market with occasional endeavours into the console market. Our aim is to have a company that’s independent and recognized for making quality games. If we were to point to studios that we aspire to match, we’d say Amanita Design, Ustwo Games or Digital Melody, those are our performance indicators. Indie-cators.

Tell us about Gerrrms that you pitched at the competition.

Back in 2019, much like everyone else, we were trying to develop a hypercasual hit game. Our prototype used the mechanics of spinning on a hook. The feeling was great, but the game wasn’t; it tested poorly and we buried that project. Several months later one of us had an ‘aha moment’ - let’s recycle that code, but add other players and get them competing against one another. The initial tests were very promising, and Switch being the go-to platform for party games became the obvious choice for this product.

What do you think are the most unique and interesting aspects of Gerrrms that gamers may never have seen before?

Most obviously, you’re playing as germs, weird little single-celled organisms that look out of this world, even though they’re very much earthlings. Not many games delve into this direction, they usually explore worlds on the macro scale. Apart from the setting, the thing that stands out the most is the controls. We spent a lot of time making sure the game can be picked up in under a minute, so the single button controls borrowed from the mobile world were ideal for this. We added a second button for power-ups that you can use once you’ve mastered the single button basic movement. And on top of that, we’ve got the analogue joystick controls that you can use to slightly alter the movement trajectory.

This way we’ve got layers of experience going from the very beginner, non-player level, through the intermediate stage of your everyday gamer, up to the pro level, when all three controls are efficiently used in conjunction, giving you the edge over your opponents. We also prepared a single-player mode for those players who want to train their skills before their friends come over.

Local multiplayer is seeing something of a mini-revival recently, especially on Switch. What made you choose this as a focus, and what do you think you bring to it that may not have been seen before?

We’ve been gamers since the early 90s, so we grew up with the first wave of local multiplayer games, such as Worms by Team17. You can say we’re naturally preconditioned to be interested in this genre. The current crop of local multiplayer games is quite vast, but at the same time, we lack a game that would manage to keep us perched in front of the screen for long hours. So we figured, we’ll make one! Gerrrms meet this criterion, at least for us. It is a simple game that gets complex when you want it to. It allows for improving your skills, while at the same time giving the newcomer a chance to take on a long-time champion. We feel this is key to a good party game, it shouldn’t give an experienced player upper hand, but should still give them the feeling of improvement over time. It is a delicate balance and we are confident we have achieved this in Gerrrms.

How did you come to choose to focus your development on the Nintendo Switch?

The game started as a hyper-casual, single tap game about an octopus flying through space. It failed as a prototype, but we retained the code for this unusual control scheme. As Switch seems to be the platform everybody is raving about, plus we’ve already got experience working with it (Numbala), it seemed like an obvious choice for a party game. The platform has a broad appeal, while other consoles seem aimed at more hardcore players.

That being said, the experience of being a Switch developer is far from good. The back end of Nintendo’s platform is very clumsy and seriously lagging in the UX department. You can’t have everything I guess.

It is pretty hard, to be honest. We need to take on work for hire engagements in order to keep the lights on. In our day to day work, we develop hyper-casual and casual games for mobile publishers, working on a retainer just to make ends meet. We still believe though that one day we’ll have a product that will give us our independence and freedom to make games that we actually would play ourselves. Perhaps Gerrrms is such a game?

Plenty. First of all, get to know people in the business. There’s a lot that can be achieved by knowing the right people. They will give you work for hire to keep your company running. They will give you the exposure your game needs. Make friends early on, this will help you greatly. It pays to attend industry conferences, the networking is worth a ton.

Second of all: engage with your audience. It’s shocking to see how many developers don’t talk to their audience during industry events. This amazed us so much that we even prepared a conference guide for indie developers.

Thirdly: do your market research. Don’t make a clone or a game so niche it’s doomed right at the beginning. If the first game you make is intended to be a massive role-playing multiplayer game, your adventure in the game dev world will most likely remain an expensive hobby.

Lastly: brace for impact. You need to keep your budget spreadsheet open and updated at all times. You need to learn to follow a budget and know when the reservoir runs out. This allows you to make informed decisions and perhaps some cuts in the development cycle.

It is by far the most time-efficient way of connecting with industry professionals. There’s really little time for a proper discussion, but this can give you an edge: the first impression is the only one you’re gonna make. It pays to make the best one you can. Speed pitching is quite a bit more difficult for a Switch game, there are lots of shuffling with controllers, but it’s definitely doable.

Though it’s a stream of presentations, it isn’t as stressful as you might imagine. There’s almost no waiting, so before you start worrying, you’re in.

That’s an easy one: the exposure! Developing premium games, the old fashioned way requires you to rely on reviews, ratings and articles to hope for any kind of financial results. Becoming one of The Big Indie Pitch winners will give our game more air time than we could have hoped for.

At the time of writing, the Switch’s library of local multiplayer games seems modest. We hope Gerrrms will be able to secure a strong and visible position in that catalogue, giving us the drive and resources to carry on with our future projects.

Want to show off your exciting new game? We host Big Indie Pitch events throughout the year, so be sure to regularly check our upcoming events page here and over on BigIndiePitch.com.