Why not make next month’s two-day blockchain and mobile games industry conference a working holiday? 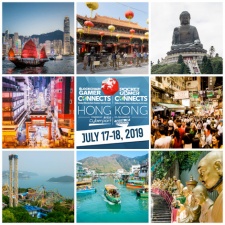 Situated in the South China Sea on the eastern side of the Pearl River estuary, Hong Kong has always been the gateway to the East. And today that statement is especially true of the games industry.

The region is on the doorstep of mainland China and the manufacturing hub of Shenzhen. It also offers easy access to vast gaming markets, such as South Korea, Taiwan and Japan. And Hong Kong itself is home to a growing number of start-ups alongside major companies such as Riot and Gameloft.

Hong Kong should be on your bucket list of travel destinations because it provides one of the most fascinating experiences in the world. A melting pot of over 7.4 million people, this tiny territory is an extraordinary blend of Chinese, British and global cosmopolitan culture. It hosts stunning architecture, mouthwatering cuisine and unique examples of natural beauty.

Given its location near the equator, Hong Kong benefits from favourable weather all year round, with July, in particular, being a highlight. Which funnily enough is when Pocket Gamer Connects Hong Kong makes its debut on July 17th and 18th.

If you’re making the trip to join us for the two-day blockchain and mobile games industry conference, why not make the most of it with a few vacation days either side of the event?

It's such an amazing place to visit that we could list hundreds of things we'd recommend seeing while you're in town, but here are our top 10 things you should experience in Hong Kong.

If there’s one single thing that anyone should do when visiting Hong Kong for the first time, it’s take in the spectacle of the city skyline from Victoria Peak. It’s the highest point on Hong Kong Island, rising 1,300 feet above sea level and the views of Central Hong Kong and Kowloon are as spectacular as you’d imagine.

Hong Kong's number one tourist destination also boasts its own architectural icon, the Peak Tower, which houses restaurants, shops and things to do. You can walk to the peak if you’re in ‘peak’ physical condition, but most visitors ride to the top in the Peak Tram, the city's oldest public transport. On the way, you’ll also experience the optical illusion of the tall buildings on your right appearing to fall towards the Peak, as studied by The University of Hong Kong.

This is the Hong Kong instantly recognised around the world from movies and TV shows.

With its striking waterside skyscrapers, this is the Hong Kong instantly recognised around the world from movies and TV shows. First noted in maritime maps in the early 15th Century, the natural harbour separates Hong Kong Island from the Kowloon Peninsula. A former British colony, the harbour gained its present name from Queen Victoria.

You won’t want to miss the daily sound and light show, A Symphony of Lights, from 8pm every night. More than 40 buildings combine searchlights, lasers, LED screens and lighting all set to a soundtrack by the Hong Kong Philharmonic Orchestra.

Best seen from Tsim Sha Tsui's waterfront, which is easily accessed by the famed Star Ferry - a regular ferry service dating back to 1888 that was the only way to cross from Hong Kong to Kowloon before the road and rail tunnels were built.

TST is a destination in its own right, with many shops and landmarks, such as Kowloon’s bustling streets and the Avenue of Stars that was inspired by Hollywood’s Walk of Fame.

Pop on some sensible shoes, top up your water bottle and take a deep breath before starting the steep climb up 431 steps to Man Fat Sze. But since the route is lined with some of the nearly 13,000 gold coloured life-sized statues of Buddhas on site, you might be happy to take a breather and a closer look along the way.

Despite the fact this ‘monastery’ has no monks, when you reach the top, you’ll find a temple and pagoda that are Grade III historic buildings.

Pilgrims travel from across Asia to visit this Buddha.

Speaking of Buddhas, if you’re more interested in size than numbers, you should take in the Tian Tan Buddha, otherwise known as Big Buddha. And they’re not wrong - it’s the largest outdoor seated Buddha in the world.

There’s another climb up hundreds of steps - just 268 this time - to meet the 34-metre statue that was erected at the Po Lin Monastery in 1993. Taking 12 years to complete, pilgrims travel from across Asia to visit this Buddha with his hand raised to deliver a blessing to all.

The monastery itself is one of Hong Kong’s most important Buddhist sites and home to practising monks. Located on Lantau Island, what more spectacular way to get there than riding the Ngong Ping 360 Skyrail Cable Car to the village that’s just a five-minute walk away?

Not far from Big Buddha is the fishing village of Tai O. Often called the ‘Venice of Hong Kong’, Tai O is home to the Tanka, who for generations have built their houses - Pang Uks - on stilts above the tidal flats of Lantau Island.

You could overnight in the former Police Station that’s now a Grade II historic building and boutique hotel, or charter one of the locals to take you out to sea in their boat to try to spot Chinese White Dolphins.

Thrillseekers should head straight for the roller coasters and raft rides, while animal lovers can take in a diverse collection.

One place you’ll be guaranteed to see animal life is at the slightly odd combination of zoo and adrenaline rides, Ocean Park. Opened in 1977, Forbes ranked the 915,000 square metre site as the 7th most popular theme park in the world.

Thrillseekers should head straight for the roller coasters and raft rides, while animal lovers can take in a diverse collection of residents. Exhibits include monkeys, koalas, wallabies, walruses, seals, arctic foxes, snowy owls, penguins, seals, dolphins, over a hundred sharks and rays and 5,000 fish.

The Amazing Asian Animals exhibit features wildlife from the region such as red pandas, giant salamanders and alligators. But we reckon the highlight for most visitors will be the two giant pandas, Ying Ying and Le Le. Part of the proceeds from every ticket is donated to wildlife conservation projects.

The temple is dedicated to a fourth-century monk whose portrait was carried by a Taoist priest from Guangdong, China in 1915 and is now on display here. Feng Shui fans will appreciate the structures representing the five geomantic elements of metal, wood, water, fire and earth.

Every night, the traders and entertainers set up stalls for this colourful bazaar that’s a riot of colour and sound. The eclectic range of goods on offer include everything from handmade jewellery and trinkets to fashion, watches and tech. Some branded items may not be authentic, so haggle accordingly.

If you build up an appetite in the night air, street food vendors serve up claypot rice, seafood, noodles and more for you to munch on as you take in this celebrated market that’s become so famous it’s served as a movie location.

Revelers spill out into the street, set to a soundtrack of loud, throbbing music.

Looking for a little more action after dark? If you’re in the mood to party, then head down to Lan Kwai Fong. Lined with an array of bars, clubs and restaurants, proprietors will do their best to pull you into their establishments as revellers spill out into the street, set to a soundtrack of loud, throbbing music from all sides.

Anyone looking to experience the wilder side of Hong Kong’s nightlife will find LKF packed with locals, ex-pats and tourists making the most of the happy hour deals from the 90-plus venues.

For a more civilised take on Hong Kong nightlife visit Ozone, the self-proclaimed ‘highest bar in the world’. Located on the 118th floor of the International Commerce Centre as part of the Hong Kong Ritz-Carlton, Ozone offers amazing views as the backdrop to Asian tapas and signature cocktails.

Some evenings host celebrity DJs, but you could just pop in for Sunday brunch if that’s more your speed.

The Hong Kong conference will offer an accessible meeting point for companies from West and East to come together.

Whether you’re flying in early or leaving a few days after the event, the first ever Pocket Gamer Connects Hong Kong will obviously be the highlight of your trip. We’re so excited to bring our hugely successful series of events to a thrilling new location at Cyberport and in association with Animoca Brands - and we hope you’ll love it too.

The Asia-Pacific region is at the heart of the biggest growth - and many of the most exciting trends - in the games business right now. Our ambition is to build a genuinely international event that will celebrate the region, as we've achieved elsewhere in London, Helsinki and the USA.

The Hong Kong conference will offer an accessible meeting point for companies from West and East to come together to share information, discuss trends, network and do business.

Not booked your ticket yet?

Fear not, for happiness is but a single click away…

Who will you do business with at Pocket Gamer and Blockchain Gamer Connects Hong Kong 2019?