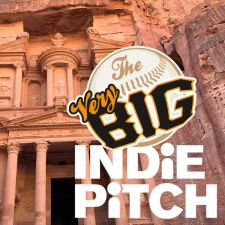 You can read more about Mulled 2 and its competitors below. There were 13 entries in total, by developers in the MENA region and beyond. It took place on the second day of Pocket Gamer Connects Jordan 2019, which was our very own two-day conference in the region. PocketGamer.biz and our Big Indie Pitch competition have taken part in the Jordan Gaming Summit before, but in November 2019 we ran our first Pocket Gamer Connects conference in the region and, with it, the first Very Big version of our indie competition in the Middle East.

The Big Indie Pitch sessions are game pitching activities that we run about 20 times a year, all around the world. It's a chance for small teams to present their in-progress projects to a panel of press, publishers and industry experts. Teams are afforded feedback, make new contacts, and maybe win a prize. This one was sponsored by our season partner G-STAR, plus sponsors Kwalee and Plug In Digital.

The quality of entries was very high this year. The eight judges enjoyed all the games they saw. Choosing winners was very difficult, but in the end, these games were selected as the ones to watch...

Sporting a polished, minimalistic interface, this is a puzzle game where you push a ball into a hole. Sound simple? Consider that each coloured ball behaves in a different way. Oh, and each type of hole behave differently too. There are 100 handcrafted levels to challenge you, plus a level creator where you can create your own to share with the world in the community section.

The judges commented positively on the excellent aesthetics, the in-game instructions and the way the player is introduced to the mechanics of play, and the level editor. “Publish this game as soon as you can!” was the overall message. A great win for Hako Games, who take home a golden baseball bat, certificate, and an indie advertising package so that they can promote the game on Steel Media’s network of sites.

Another ball-based game scooped the second prize at this Very Big Indie Pitch. Sakura Games – a team of two young women from Jordan, whose prolific output included two other games submitted in Amman this year – has crafted a 3D puzzle where you must avoid obstacles to reach the end of each level.

With a slick isometric look and the ability to compete with your friends, it’s a hypercasual gaming experience with an instant appeal. “I thought this was brilliant,” said one judge; they all praised its less-is-more style. You can actually try Bouncy-GO! yourself on an Apple device right now.

We first saw a version of Murad’s game in a 2018 Big Indie Pitch alongside The Jordan Gaming Summit. Since then, Murad has remade his mobile VR racing concept as a polished AR driving challenge. It features the ability to set up your vehicle in the garage, then take it to explore beautifully crafted terrain which you view in your environment through the use of augmented reality. The judges were very impressed with this, enjoying the puzzle element of navigating the landscape – finding your way is part of the challenge.

Congratulations to our three top teams, and to all our entrants: there wasn’t a duff one among them. The teams all received feedback from the judges and we look forward to seeing them again next year. We also conducted a PC Indie Pitch in Jordan, with the two winners there being Mohammad Arkobi with Sticks And Bones (runner up) and Monupon with Wild Thieves (PC winner).

You can sign up for other Big Indie Pitches – and be in with a shot at prizes, promotional spend, and press coverage – at www.bigindiepitch.com. The next opportunity will be in London this month, alongside Pocket Gamer Connects London 2020. We’ll be back in Jordan in November.

Last chance to save on tickets for Pocket Gamer Connects Jordan

Here’s how you can get into Pocket Gamer Connects Jordan - free!