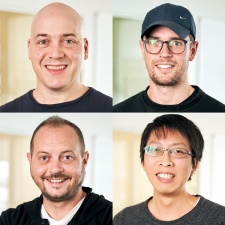 A new hyper-casual games development and tech start-up has opened in New Zealand hoping to shake up the sector.

Called JaffaJam, the studio has experience working on over 75 casual titles for the likes of Disney, Sony Pictures, Zynga, Marvel and more.

The developer is headed up by CEO Jon Beattie and former SEGA producer, COO Alex Humphries.

Its first game is Mountain Madness, which is already in soft launch using the studio’s own BubbleGum tool, an API designed to help streamline development and rapidly prototype new casual titles.

The tool will be made available to third-party developers, along with access to a cloud services backend, live ops support, analytics, A/B testing and marketing services.

To find out more about the studio’s ambitions to break into the highly competitive hyper-casual space, and what it will be offering to other developers, we caught up Jon Beattie, Alex Humphries and Alexis Rabadan to get the lowdown.

How did JaffaJam come about and what is your main focus as a company: development, technology or publishing?

Alex Humphries: The ideas that coalesced into JaffaJam came about as a result of a complete rethink of our studio processes after the release of our puzzle game Samsara across console and mobile platforms.

It received widespread acclaim, won awards, even made it onto one ‘Top 10 Games of 2018’ list, but only enjoyed modest commercial success.

We looked at the entire process from concept to the game being in the hands of the player, applied our learnings from self-publishing across multiple platforms, and asked some pretty tough questions of ourselves about business models.

The quick iteration of titles reduces the overall development cost, while still delivering fun and engaging titles for consumers.

We realised we needed to create a comprehensive pipeline for game development, live operations and marketing to allow us to iterate quickly through development and onto the stores in a rapid timeframe.

The quick iteration of titles reduces the overall development cost, while still delivering fun and engaging titles for consumers. And we quickly realised we were just one of a huge number of studios that could benefit from this.

Jon Beattie: We see ourselves as a company with broad strengths – but if you have to put the focus anywhere first, it has to be on technology.

Our pipeline delivers the efficiencies that allow us to spend more time perfecting design, and strong backend services for taking games to market. Team members have experience within many different areas of technology and development, some with gaming backgrounds and others in enterprise software, giving us the ability to create strong backend services.

But we are all massive gamers at heart, so we strive to create fun and enjoyable titles that we all like playing.

Who’s on the team at JaffaJam?

Humphries: We currently have an experienced team of 10, including the four founders. Jon Beattie, our CEO, has a wealth of experience in full-stack digital development and is a recognised user experience expert.

Freddy Weng and Alexis Rabadan are our development gurus and creators of our framework BubbleGum and upcoming game Mountain Madness.

The fourth founder is myself with a strong background in publishing having worked for SEGA for the majority of my career and we have also brought on ex-Activision PR Director Tim Ponting.

The hyper-casual games space has become increasingly crowded, so what makes JaffaJam unique from competitors? And what are the challenges in the market you think you have the answers for?

Beattie: We believe that our difference will come from our strong focus on the developer experience with our partners, and creating an ongoing relationship with our players.

By this I mean, before we release the BubbleGum SDK and Cloud Services to third-party developers, we are putting effort into making sure the documentation and Dev Portal is going to make it easy for them to start using our tech and delivering games.

As indie game devs ourselves, we believe in having an open, transparent and collaborative approach with our partners.

As indie game devs ourselves, we believe in having an open, transparent and collaborative approach with our partners, that perhaps has not been a consistent theme across the industry. For players, they will experience familiar characters and a consistent UX/UI across our titles.

You mention building profiles of player preferences and serving them individually targeted experiences. What do you mean by this and how would this work?

Beattie: The wonderful thing about hyper-casual is that it’s about entertainment, not seriously competitive gaming. As such we can adapt gameplay to respond to what an individual player responds to.

For example, if we learn that unlocking characters is the primary motivator for a player, we can prioritise these in the rewards and recognitions, whereas another player might prefer different rewards.

The BubbleGum SDK will programmatically create levels, allowing us to potentially (for single-player games) adjust the difficulty to suit the player’s abilities.

Could you go into more detail about BubbleGum and what exactly it offers developers? Why do developers need such a tool?

Alexis Rabadan: We built BubbleGum to streamline the development processes for hyper-casual games. Using this API, we are able to rapidly prototype with code that is also viable for production.

An example might be the need for a procedurally generated world - we use the API to generate maps right out of the box and can extend or adapt these to suit our requirements.

Other API offerings include localization, music mixers, asset management and pooling. The nice thing for developers is that these are all designed to work with or without each other, allowing a mix of your systems with ours.

How do you hope to develop BubbleGum further in future? What’s the goal for the SDK?

Rabadan: With the way the gaming landscape is always changing, it is impossible to know where BubbleGum will end up.

We definitely need to look into developing stuff for the new Entity Component System in Unity. A solid system for development there would really mix up the hyper-casual genre as we could take advantage of modern processors in phones and tablets.

Can anyone developer use your toolset regardless of a publishing deal? What are the licensing terms for BubbleGum?

Beattie: We are not dismissing this option out of hand, but at this stage, we saw the BubbleGum SDK being an optional, but not mandatory, aspect of publishing with us.

Our view is that the value we bring is greater than just the technology. However, with the JaffaJam Cloud Services, when we release this to the game dev community, you will be able to use this without publishing through us.

Our model is based on the assumption that success in indie game dev is not solely a technology challenge. We are looking forward to making more detail available and engaging with potential partners. We will always listen and can adjust our model and plans based on feedback from partners.

In regards to publishing, what kinds of development partners are you looking for and where?

Humphries: We will be starting our outreach for development partners later this year in September at the New Zealand Game Development Conference, where Alexis will be hosting a talk about elements of the BubbleGum framework.

We will be starting our outreach for development partners later this year in September at the New Zealand Game Development Conferences.

At this point we will be talking to New Zealand and Australian indie developers about publishing on our platform with the plan to release our first partner games before the end of 2019. If all goes well, we will then look outside of Australasia for additional partners in 2020.

What markets will you be targeting with your games, both self-developed and those from your development partners?

Humphries: With the style of games we are creating, which are lightweight, snackable experiences for our consumers, we will predominantly be focused on the hyper-casual and casual mobile markets.

Our first game Mountain Madness, released later this month, fits perfectly into the sector, offering a fun and engaging downhill skiing experience for kids and adults alike. For those who also like a challenge, we have an endless competitive mode that really highlights the madness aspect!

What other services do you provide developers?

Humphries: In addition to the BubbleGum framework Alexis has already mentioned, JaffaJam’s overall platform offering includes a Cloud Services backend for partners to integrate with, which gives our players a cohesive experience across different games, along with the ability to share gifts and content.

We will also offer live ops, analytics, A/B testing and marketing services. We want to include our partners on this development journey and will be adaptable to their needs by refining our service offering as we grow and mature.