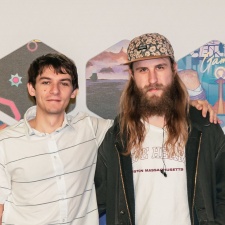 Today, we're speaking to Bradley Smith from Miracle Tea, who pitched Alula at The Digital Big Indie Pitch #4 (Mobile Edition) in October and walked away as the champion.

Bradley Smith: I’m Brad Smith, Creative Director at Miracle Tea based around Suffolk in the UK. Myself, the wonderful Tom Andrews and Enrico Ercole have been running Miracle Tea and making games together since 2016. We’re best known for our game Ruya thanks to some of the coverage that Pocket Gamer has given to us in the past. Miracle Tea typically tries to pull inspiration from non-gaming spaces or personal experiences. We talk a lot about life, philosophy, spirituality and music which naturally finds a way of bleeding into the design of our games. We typically try to explore a very specific set of emotions to elicit or ideas we want our players to think about. If I were to define a Miracle Tea game to a new player as to what they might expect, I would say cosy, heartfelt with a twist of melancholy.

Tell us about Alula that you pitched at the competition

We pitched our latest game Alula. It’s a stargazing gardening game about what it means to be alone in the universe. You find yourself alone on an island receiving notes in bottles asking you to fulfil certain obligations. A tree gradually grows in the centre of the island as you slowly come to discover why you’re there and who’s sending you the bottles. If you enjoyed the universe that we created in Ruya, then you’ll be in for a treat with Alula.

Just a small section of what Alula comments on is partially inspired by a short story entitled ‘The Egg by Andy Weir'. Alula explores solipsistic themes about the nature of the human consciousness all wrapped up and presented on a dreamy looking island. Our intro sequence revolves around asking our players the question, ‘what if you were to pre-determine the player character of your life’. We’re trying to achieve a philosophical metanarrative that attempts to make our players question their own reality.

Alula is a game that looks to mix gardening, puzzle, and management. elements together. Obviously, this is very unique and not something we've really seen before. How did you come to make a game like this, and what do you think you think it offers that might have never been seen before?

I kept hearing the phrase ‘no one is an island’ in passing from different people and sources. It became something I thought about a lot. It stuck in mind and informed the original concept art for Alula back in late 2018. A lot of the art and themes come from a personal place of working through some stuff. I also just tend to really like plants and staring at stars. Tom already had an experimental puzzle prototype with some basic rules in place around that time too. All of those elements you mentioned naturally formed throughout development based on Tom’s prototype to help inform the original illustrations. We bounced a lot of ideas back and forth and we went through a handful of iterations to get where we are today.

Combining elements together is something we did in Ruya too. It’s interesting to try and marry two or more genres to see what happens. Often something unusual emerges. Though, this can be seen as quite risky for investors as it can be more time consuming for devs. So far, Alula has a game loop that doesn’t seem to resemble many games while being still really engaging which we’re pretty chuffed about. Enrico is even experimenting with ‘plantwave’ as a way of translating electrical variations in a plant’s leaves into pitch messages that can be used for the game’s audio.

How did you come to choose the platforms that you would develop Alula for?

Playtesting at events tends to give clues as to what platforms might be suitable based on the types of players and how people interacted with Alula. Also, we’re a small team, so going with the platforms that we have experience in and that has been good to us in the past is a factor. Though we have the mentality of getting our games on as many platforms as possible. Ruya was initially an iOS and Android game but we’ve ended up porting it on loads of platforms over time and are in the process of working up the Nintendo Switch version alongside Alula development. So, expect to see Alula on all the platforms that Ruya is on and potentially more. We’d really love to get Alula on Apple Arcade, to be honest.

It’s difficult for indies, a lot quit and most of our peers barely scrape by mentally and financially. Though that’s true for most people in general so it’s useful to count our blessings in being able to do what we do. Miracle Tea understands that world, so we try to embrace the struggle that can come from being independent and trying to monetise creativity with gratitude. It’s important for us to not take anything for granted. Everything worth pursuing feels like it should be hard. There’s a lot of pressure to succeed, to be someone or say something important in the games industry. It can be easy to get caught up in all of that pressure and social comparison. I try to remind the Miracle Tea team from time to time the importance of playing the long game, mitigating expectations, encouraging personal growth and simply falling in love with the work of making games.

Study the greats, study the worst and understand the differences. Be genuine, honest, patient and persistent. Embrace failure, ego death and limitations. Look after your back. Be kind to yourself. Find your limits but work to sustain yourself over a long period of time. Pull from non-gaming spaces. Make personal games. Make a game for someone you love. Treat players with respect. Ask yourself why you’re doing what you’re doing from time to time. Show your work. Teach others. Smile and keep your teeth clean.

This was actually the first time Miracle Tea participated in Big Indie Pitch but the whole experience was great for us. We often live stream Alula development on Twitch, so many of the questions I was faced with during the Big Indie Pitch we had been confronted with before in some shape or form. All the streaming experience made me feel very comfortable talking about Alula in a concise timeframe with a deep understanding. Pitching was a real rush and the rest of the team were stoked on the result. The timing couldn’t have been better for us, it did wonders for our morale and confidence which I think we really needed. We’ll definitely be pitching again and recommending to our developer peers!

Aside from building Miracle Tea’s pitching mileage, morale and confidence in our game. Big Indie Pitch has already opened up a handful of opportunities with publishers and press. We got put in contact with the charity organisation Safe In Our World who’s currently writing us a piece on Ruya and Alula as a result of a meeting we had from the PGC Digital #4 event in early November. This wouldn’t have happened without Big Indie Pitch so thank you! Beyond this, we still hope to gain contact with potential platforms and investors to help grow further support for Alula and see us launch on time.

We aim to launch Alula by 2022 on as many platforms as our small team can manage. After Alula, depending on where Miracle Tea are at creatively or personally, we will either start development on a much darker game called Oath or explore some old prototypes that we have in the backlog from previous game jams. In the future, we want to keep hosting our own game jams, continuing to grow the Miracle Tea commune and offer more space for creative outlets in our community. Beyond that, I want to keep the development team as happy as possible while trying to make Miracle Tea a really cool and chill place to work.