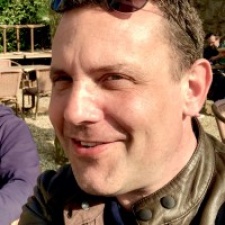 Today, we're speaking to Chris Kempt from Dead Five, who pitched Light The Fires at The Digital Big Indie Pitch #4 (Mobile) in October and walked away with the prize for second place.

Chris Kempt: Well we’re called Dead Five because there are… er… four of us? We originally started working together during the Flash games scene in the early-mid noughties and then made a hop over towards mobile towards the end. We’ve worked together for over a decade now so it’s quite remarkable we still get on!

One of the things that makes it work is that we share a love of simple, accessible and often amusing games we’ve been watching the hypercasual space with interest for the last few years and when we all exited our last studio it made sense to get involved! Two of the team are brilliant developers and the other two (including me) are from an art background - we’re trying to make games that are super-solid as well as super-beautiful.

Tell us about Light The Fires that you pitched at the competition.

Light the Fires started as a prototype just before the beginning of lockdown in the UK. We could immediately see that there was something interesting there and so I showed it to a bunch of friends and random people that I met in pubs (remember when that was possible?!) everyone I showed it to loved it and wanted to binge the content all at once so we decided to work on it in secret until very recently.

What do you think are the most unique and interesting aspects of Light The Fires that gamers may never have seen before.

Most obviously it’s the gameplay mechanic which - I believe - is very new. The player has to pick up fire (and other objects in the environment later) and move it around the space in order to light all the fire-pits. The result is an interesting puzzle mechanic which feels very serene - a little like playing with one of those sand gardens? On top of that, we’ve tried to make the meta-game a little deeper than would be typical for a hypercasual game and we’ve also put a lot of effort into making it look super-pretty which we hope users will appreciate.

Puzzle games are not only some of the most popular on mobile platforms, but they also attract a variety of different gamers too. Given there are so many popular puzzle games available, what made you choose this genre, and what do you think you bring to it that may not have been seen before?

We didn’t so much choose the genre here as it chose us! Since we started D5 we’ve worked on 50+ different concepts and prototypes some more successfully than others - this one was amongst the most successful and started from the basic mechanic, from there it was simply (but time-consumingly) about working out what kind of experience was most suitable for that mechanic.

How did you come to choose the platforms that you would develop Light The Fires for?

Since we’re an Apple/Mac-based studio we tend to develop for iOS first and the smaller iOS ecosystem makes it easier for us to ensure a consistent and stable experience for all users. We are now working on making it work for Android devices and will be looking for beta-testers for that soon!

Wow, that’s an interesting question. This simple answer is that it’s super-hard but somehow I’ve managed it for most of the last 17 years but it’s certainly not a lifestyle for the faint of heart.

The tricky thing about games is that you can get everything right and still fail “Work For Hire" can help with that from time to time but it’s difficult to juggle that and your own developments. I think the best approach is to raise investment and make sure that everyone is on the same page - i.e. that success is in no way guaranteed.

Unless you have backing do it at a time when you have as little commitments as possible or in your spare time, having people that depend on you makes it super-stressful otherwise.

It was super-fun and I actually enjoyed talking to the other developers just as much as the judges.

It was really interesting to hear external opinions on what we’re doing with this game - particularly the praise :) - whether we change much about the game will depend a little on the next beta tests we do and we’re really happy that you guys are helping with that - thank you!

Well, for one thing, we hope to get it out and make some cash with it so that we can go on to make even more games! We do, however, have four other games at a similar stage so maybe one of those will work?! Following that - I dunno - if we can make some real money I’ve always fancied running an arcade with a bar in it.