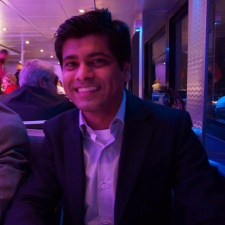 The event gives indies five minutes to pitch their games to a panel of press, publishers and industry pundits. The judges then pick three winners and everybody gets valuable feedback.

This time, we spoke to Yogesh Chhawasaria from JollyLabs, who recently pitched Dance Army as a part of the first-ever Big Hypercasual Pitch at Pocket Gamer Connects Digital #8 and walked away with the third-place prize.

Can you tell us about Dance Army that you pitched at the competition?

Dance Army is a hypercasual game where you put on the shoes of a dance coach. Players can choose which dance steps to play next and then identify which one of the students are not up to par and kick them off the team/class.

The animations and dances and the dialogues between the coach and the students add a variety and novelty element to the game.

What do you think are the most unique and interesting aspects of Dance Army that players may never have seen before?

It's about a dance coach and their students, so they can see characters doing small dance steps in different styles.

Also, we feel that the interactions between the coach and students are refreshing, as most hypercasual games have emojis when reacting to NPC elements.

Obviously, this pitch focused on hypercasual experiences. What made you choose this genre, and what do you think you bring to it that may not have been seen before?

Hypercasual games are quick to prototype and validate. There is also a very strong publisher pool eager to work with you and test out new game concepts via their publishing pipeline.

We like to experiment with new mechanics, puzzle designs, and explore different ways to interact with the game elements. In fact, in one of our experimental work in progress games, you don't even see anything on the screen until the level is over.

How did you come to choose the platforms that you would develop Dance Army for?

We have been developing mobile platforms for a long time, and already have the internal development, QA, deployment and publishing process in place for these types of games.

Hypercasual works best for mobile platforms so our focus is on iOS and Android Play stores. Also, the intention was to work with publishers, and they test on these stores for KPI thresholds.

Looking at the studio a little more now, how hard is it to survive as an Indie developer?

For a long time, you have to balance the revenue from consulting projects/other sources and use it for your game development. We did try to raise project finance for our in-depth puzzle game but we couldn't find any takers for it.

One of our learnings was to be a little more conscious of what we can extract and bundle from our game projects. As these can then we can sell these as independent assets on Unity AssetStore or stock graphic assets sites, which will bring in some passive income while we continue to work on future games.

Are there any tips and/or advice you would give to an independent developer out there who is just starting out?

When playing other games from App/Play store, I spend some time thinking things such as:

Once you know the kind of game you would like to make, you can then compare it to a finished game, as this will highlight the contrasts and differences.

Then it is a matter of introspecting why this difference exists. Is it a preference or personal style, is it due to fear of complexity, is it due to resource constraints, is it due to impatience, is it because your imagined target audience is different from the games intended audience, or is it due to the lack of certain skillset.

Doing this puts light on the spectrum of available choices you can make and where your comfort lies on this spectrum.

It was pretty awesome actually. Thanks to Sophia Aubrey Drake who made every aspect of the pitching event very crystal clear and well organized. I was under the impression I'd only be pitching once. But I had to pitch four times to four sets of Judges which I found helped me.

The first pitch is always nervous and uncertain. Then based on how the first pitch went I adjusted the pitch a little and addressed the previous judge's questions to the next set of judges beforehand. So by the time I was in the fourth-judging-set I was all polished.

It was a great experience to pitch our game and gain valuable feedback from the judges. It gave us an idea of the first few important things publishers and judges look at while assessing a game.

We'd like to be working with a publisher to take this game further and expand on it. We are also kickstarting another seven months-long game project (Project-MYGAD).

We believe there is a very strong craving from players for a certain kind of game which is not being met right now, and this new project intends to satiate that vacuum with its USP and freshness.