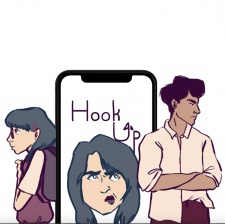 It feels like an age since we began hosting digital pitches in response to the global situation.

However, despite the circumstances that necessitated this move, our digital pitches have only gone from strength to strength, allowing us to host an ever-increasing range of diverse brand new gaming experiences from some of the world's most exciting indie developers.

Most recently that meant hosting our Mobile Big Indie Pitch at Pocket Gamer Connects Digital NEXT supported by N3twork and Green Grey. An event we hosted in part due to the overwhelming demand from talented indie developers for the previous pitches.

As always, the competition was extremely tough, with more than half of the 14 developers being voted for in the final round of the judges' selection. Nevertheless, the judges did settle on a top-three, alongside one honourable mention. Most impressive was that the winner was unanimously decided upon. A rare feat at The Big Indie Pitch.

That winner was Hook Up, an emotional and comedic exploration of the trials and tribulations of finding love on dating apps in modern society.

Of course, Hook Up, as you already know, was the winner, but if you want to learn more about not only Hook Up but also our runners-up and honourable mention from The Big Indie Pitch at Pocket Gamer Connects Digital NEXT, then read on.

1st Place - Hook Up by Team Hook Up

Hook Up starts with a simple yet complicated premise - What if... you matched with your high school bully on a dating app? It's an interesting question, one that Hook Up's lead character, the sex-positive 20-something Alex, must navigate as she looks for love and companionship on the dating app Hook Up.

Understandably, this unforeseen situation leads to Alex's world is turned upside down. However, all is not as it seems, as George, her one time bully, is now a successful hedge fund manager, one who doesn't seem to be the same person she knew. Can Alex forgive Geroge as they become closer, in turn dealing with her own trauma? Or will their pairing prove a mismatch?

In this unique, action-packed title players will be tasked with creating exciting fantasy bases, going on challenging quests, conquering fellow players' bases, and exploring the world of the Guardians. Building upon gameplay elements commonly found within MOBA and base-building genres, Ablaze Interactive hope to create a unique blend that offers exciting multiplayer action without any of the usual pressures and game-breaking consequences.

As such, Guardians of Elderon promises to be an accessible and enjoyable experience. One in which players can really put their strategy skills to the test as they take on the all-powerful Guardians.

A previous Big Indie Pitch Honourable Mention, this time Anna Sevryugina's 3D hidden object game Hidden Office went one better and deservedly grabbed the third-place prize. Within Hidden Office, players must rotate, zoom, explore and most importantly relax, in order to discover all the hidden cats and complete the checklist of discoverable items.

Presented in a cute and adorable style, it's hard not to fall in love with Hidden Office. However, this wasn't what impressed the judges the most. In fact, what impressed them the most was the number of unique innovations made to the hidden object genre that help this game stand out from the crowd. A not so easy feat for a popular genre like this. So grab some headphones, get in a comfy chair, and see if you can find all those cute yet pesky cats.

The Day We Fought Space is a game all about spiralling chain reactions. Within the game, players must take to space in their spacecraft in order to find their way through enemy territory, and hopefully reclaim Earth. However, there's a twist. You see, as you strategise, battle and explore, players will find that everything from upgradable weapons, the environment, your spaceship, and even the debris can be chained together in order to create chaos on the battlefield and increase your attack potential.

As such, this is a game that is just as much about quick thinking as it is about long strategy, and thanks to the procedurally generated environments and limitless customisation options, it's also a game that is unpredictable and fresh on every playthrough.