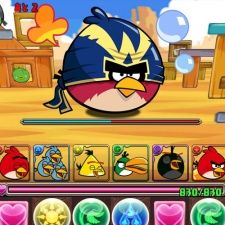 During the event Puzzle & Dragons players will be able to battle their way through a brand new dungeon featuring characters and monsters from Angry Birds Epic.

Match made in heaven

Angry Birds Epic players will also be able to get in on the franchise-switching action.

Those playing Rovio's RPG will be able to experience a brand new Puzzle & Dragons themed level, where they can battle popular Puzzle & Dragons characters such as Tyrannos, Baddie, and Tamadra.

Both Rovio and GungHo will be hoping that the event can breathe even more life into franchises that continue to dominate the mobile landscape.