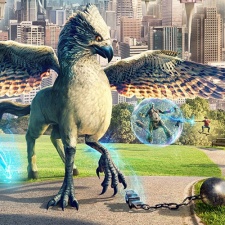 It couldn't find its way into the top 10 grossing rankings however, though it should be noted the game was launched in the middle of the week on June 20th.

Roblox was the week's biggest revenue generator on iOS, while Supercell's Clash of Clans was king on Android.

Wizards Unite entered the download rankings in third on the App Store and second on Google Play this week, while Voodoo's Aquapark.io took top spot on both stores.

Though Roblox took the top grossing spot on the US App Store, its surge up the UK rankings saw it halted in second as Moon Active's Coin Master continues to reign supreme. Clash of Clans took third spot on both stores, behind King's Candy Crush Saga on Android.

All the top five most downloaded games this week were new to the top 10. They included Tencent's Raziel in first, NetEase's Sky in second, Shanda Games' Fallout Shelter Online in third, Tianma's One Punch Man in fourth and Drodo's Auto Chess in fifth.

Surprisingly the top 10 left no room for Game for Peace and Honor of Kings, though the two titles retained the top two grossing positions.

There were a few new top 10 grossers on the Chinese App Store this week. Most notably, Tianma's licensed game One Punch Man hit fifth spot, while Tencent's Legend of Swordman 3 and Raziel took sixth and 10th.