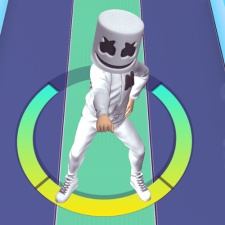 The artist is using the app to debut his latest album Joytime III, which will remain exclusively available in the game for 24 hours before its public release.

Available on the App Store and Google Play, Marshmello Music Dance, the game tasks players with tapping titles to the rhythm of the music.

The DJ himself will appear in the game, as well as other characters, offering up different dance moves to the music. Gamejam plans to launch new characters each week.

“We wanted to capture those epic moments in Marshmello's concerts and create a challenging yet rewarding experience around them, so we made a tile tapping music game where the player taps the tiles to the rhythm of the music,” Gamejam CEO Christian Calderon told PocketGamer.biz.

He added: “We were presented with the opportunity by Marshmello looking to publish his first mobile game.

It’s not the first time Marshmello has been involved in games. Back in February 2019 he made headlines for starring in the world’s biggest ever music concert, attracting 10.7 million people. Rather than a physical location, the concert took place in Epic’s hit battle royale game Fortnite.

“He certainly paves the path to inspire other artists to integrate their work into games,” said Calderon.

“For a well-known artist like Marshmello to launch an album exclusive for 24 hours within a game is really exciting because it’s never been done before.

“Marshmello now wants to start publishing games and so we hope this catches the eye of developers and artists around the world.”

Calderon said that any form of entertainment, passive or interactive, can collaborate with games. He added that Gamejam will be offering more such partnerships with deeper technical integrations in future, though for now it's focused on Marshmello Music Dance.

Calderon will be a speaker at Pocket Gamer Connects Hong Kong, which takes place on July 17th and 18th.