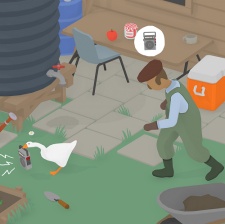 The comments were made by the Untitled Goose Game creator to PocketGamer.biz at the Australian Game Developer Awards 2019, where the studio picked up two awards on the night: Best Sound Design and Game of the Year.

“I think it’s natural that people find their own little bubbles that are sustainable,” said Disseldorp, when responding to what Australian games industry needs to do in the next few years to continue its growth.

Disseldorp added: It doesn’t’ have to be one thing and one solution or one direction that it needs to move into. I think it’s healthy and natural that things can live in their own spaces, so we can learn from one another.

Goose on the loose

Untitled Goose Game is a stealth puzzle title that sees players controlling an irritating goose whose sole purpose is to bother residents of the 1990’s style English village.

The game launched for Nintendo Switch on September 20th, 2019 and has received a strong positive reception - including the aforementioned accolades.

“The reception to the game has been fantastic,” Disseldorp told PocketGamer.biz.

“People have really liked it. It’s just a very strange thing to realise that this that has been ours for so long is being appreciated by so many people.”