G-CON 2020 is in less than one week and the content is shaping up to be world class: register now! 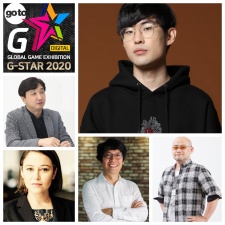 There's less than one week to go to the start of G-STAR 2020 and the networking matchmaking system is LIVE! Meetings are already being created. G-CON, the conference part, will be streamed free via G-STAR TV and will be available for everyone, and with such a star-studded line-up of global gaming giants, you really do want to make sure you are there (virtually).

The honoured guests taking to the digital stage this year will cover a vast array of topics including Game Development, Esports, AR/VR, Blockchain Gaming, and Next Generation Consoles. You will need a ticket to access the meeting platform. More details below.

This year’s speaker line-up is one of the best ever. With all talks lasting 20 minutes, you are guaranteed to learn more than just a few simple tips and tricks. With top industry speakers from companies like PlatinumGames, 2K Games, Nihon Falcom, XL Games, Hypergryph, Gen.G eSport, Facebook, Paradox Interactive, The Sandbox and many more, you will definitely find something to be inspired by, and to learn from. The provisional line-up is still being finalised and is subject to change, but here’s how it’s shaping up...

Trends in the Korean Game Industry and the ArcheAge2 development story - Jake Song, XLGames
In this session, Jake Song, Korea’s top game developer and founder of XLGames, along with other key members of XLGames, will analyze the trends in the game industry. They also discuss future plans and details on the Korean’s top-anticipated ArcheAge2.

The Story of a Star Developer who Changed the Paradigm of Action Games - Hideki Kamiya, PlatinumGames
PlatinumGames is one of leading Japanese game studio, developing the Bayonetta series, and Nier-Automata and more. Hideki Kamiya, the director of Devil May Cry, Resident Evil 2 (and more) will reveal his own philosophy and simple story for action game development in this session.

Hideki Kamiya, the director of Devil May Cry and Resident Evil 2, will reveal his philosophy for action game development

NBA 2K21 Development Story - 2K Games
The next generation of basketball games has finally arrived bringing a whole host of new features and upgrades to the series. Learn all about the development of the latest game, the challenges faced, and how these were overcome.

The Crusader Kings 3 Development Story - Alexander Oltner, Paradox Interactive
Paradox Interactive crafts games for all systems that allow players to experience rich, personal stories. Their latest release, Crusader Kings 3, launched over the summer, and has been a tremendous success, beloved by longtime fans of the series while attracting many new players at the same time.

The Age Of Making A Living By Playing Games: Pro Gamers Are Not The Last Stop - Kang Chan-Yong (Ambition), Gen.G eSport
Kang Chan-Yon is better known as Ambition in League of Legends. Kang is retired but works as a streamer for Gen.G eSports and will provide insight into the life of a pro gamer.

How Arknights Became a Unique Game – Hai Mao, Hypergryph
Arknights is a strategy RPG for mobile with visually stunning graphics and a well-crafted continuous storyline. Design Director Hai Mao will explain the story behind the game’s development.

MZ Generation Strategy: How We Found the Answers in Road of Heroes - Yoon Sung-Guk, Clover Games
Clover Games is based in Seoul and makes wonderfully creative RPGs. This talk will focus on how they used specific knowledge of their target audience to create Road of Heroes.

Blood Ocean Beyond the Red Sea: Succeeding With an Indie Game - Moon Ji-Hwan, Team Horay
Team Horay is an indie game development team based in South Korea. This talk will explain a little about the creation of its title Dungreed and its incredible achievements to date.

Current Trends in Adventure Games: Console Games in Korea - Jin Seung-Ho, LINE Games Corporation / Team Largo
Jin Seung-Ho from Team Largo will take you through the development of Buried Stars, a mystery adventure game set inside a TV studio, where players must communicate with the other contestants and try to escape the collapsing building.

VR is here to stay, but how will it continue to expand beyond games? Facebook’s Yelena Rachitsky will explore the possibilities.

The Prospect of VR Entertainment - Yelena Rachitsky, Facebook/Oculus
There is no doubt VR is here to stay, but how will it continue to expand beyond games? Facebook’s Yelena Rachitsky will explore all the possibilities.

The Next Digital Revolution Will Start in Virtual Worlds - Sebastien Borget, The Sandbox
The Sandbox is a community-driven platform where creators can monetise voxel assets and gaming experiences on the blockchain. Sebastien Borget will discuss how everyone can benefit from the virtual world experience through blockchain, and explain their native token SAND, virtual space LAND, and making your own playable game without coding or programming knowledge.

Toshihiro Kondo, Nihon Falcom
Japanese Developer Nihon Falcom should need no introduction. He’s been building magical RPGs for decades. The Legend of Heroes series has seen no fewer than 14 titles, including sub-series.

All this and more - don't miss out

G-STAR runs on 17-21 November, so there's less than one week to go to book your place at this amazing online exhibition. As well watching sessions at G-CON, a ticket gives you access to the Live Biz Matching meeting system and so much more, so this really is a great chance to explore new territory, hear from the most exciting speakers, and do business with some of the biggest games companies in the world. Full tickets cost just $200 and can easily be booked by heading to the English-language Eventbrite page.

Organized by the Korea Association of Game Industry (K-GAMES) and co-organized by G-STAR Organizing Committee and Busan IT Industry Promotion Agency, G-STAR is “the best gateway to the Asia games market”. Launched in 2005, this annual South Korean computer and video game trade and consumer show is the one-stop, easily-accessible gateway to Eastern markets, and takes place annually in Busan, South Korea. With one of the most active and developed gaming markets behind it, the biggest players in publishing, development and investment gather at G-STAR every year, to do business and set the industry trends. There's more information at the dedicated site www.GoToGSTAR.com.