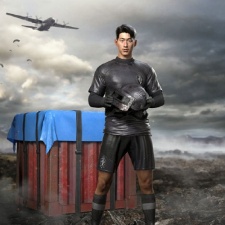 A partnership between Tencent and Tottenham Hotspur football club to bring football player Song Heung-Min into popular battle royale PUBG is in the works.

As spotted by Twitter user PlayerIGN, the partnership will see the Premier League forward be added into the popular shooter as a playable character, along with a variety of cosmetic items.

This includes two sportswear outfits, two weapon skins, a signed helmet and two of Son’s iconic celebrations as in-game emotes. The items will be available as an in-game purchase bundle supposedly by the end of July.

The partnership highlights an increasing integration between broader entertainment sectors and video games. It's no wonder PUBG and PUBG Mobile has been selected above all other games, with the title surpassing one billion downloads earlier this year, as well as generating $5 billion in lifetime revenue.

Players are expected to be able to access the bundle via PUBG's in-game store, however, pricing for the Tottenham player has not been disclosed at this time.

Heung-Min is not the first footballer to appear outside of a conventional sports game, with Cristiano Ronaldo recently appearing in Garena Free Fire.

Sportquake and Free Fire most recently explained how the Ronaldo partnership came about and how it integrated the football icon into the mobile game's universe.