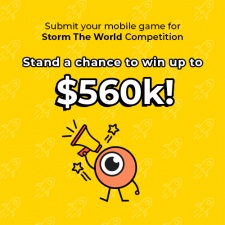 Storm The World is a hypercasual mobile game competition that aims to supercharge the growth of high-potential indie mobile game developers around the world that have yet to be discovered.

Commenting on the first Storm The World competition which was held in January 2021, Storms CEO David Yin, said:

"We saw 250 game submissions from 17 countries in the inaugural edition of the Storm The World competition. Seeing the enthusiasm and promising results in its first run, we decided to bring the competition back with more attractive prizes to win to further supercharge the global gaming ecosystem."

The second competition is offering a total prize pool of up to $560,000 and exclusive publishing contracts for the winners. The prizes include:

First prize (one winner): $100,000 cash prize for the first game submission that gets published by Storms as part of the contest

Runners-up (up to nine entrants): $50,000 cash prize for all other game submissions that get published by Storms as part of the contest

In addition, there are potential bonus prizes for other games which have performed well during game testing.

The top 10 games will be announced at the end of August, with the winners of the final round revealed in October 2021.

Submissions will be judged based on the game’s originality, production quality and market fit. The competition jury comprises experts from areas including game design, monetisation and user acquisition (UA) from Storms, Facebook and Adjust.

Game developers can submit an unlimited number of games as long as they meet the game submission criteria including:

Developers, creators and studios can submit their games and find out more about Storm The World here.