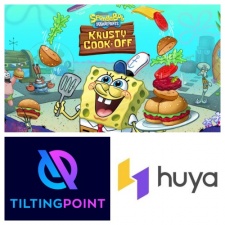 SpongeBob: Krusty Cook-Off follows the titular character through a "culinary adventure" across the restaurants of Bikini Bottom where players create their own kitchens, making and serving fast food.

Since its launch, the game has surpassed 44 million downloads across all platforms.

Huya is one of the leading live-streaming platforms in China and maintains a large and active community worldwide. Huya will use its platform to "amplify" SpongeBob: Krusty Cook-Off through "highly dynamic content" and an enticing social gaming experience for players.

"SpongeBob: Krusty Cook-Off has already seen great success, and this partnership allows us to tap into Huya’s 169 million monthly active users, bringing the game to a massive new audience in the region," said Tilting Point co-CEO and president Samir Agili.

"We are excited to work in tandem with Huya on SpongeBob, and we look forward to exploring more growth opportunities for our roster of games with their team in the future."

Huya director of game publishing Yuan Wei added: "Tilting Point’s vision and execution for SpongeBob: Krusty Cook-Off has been so successful, and we are confident that the game’s gameplay and fan-favourite characters will resonate extremely well with players in Mainland China.

"Our team’s vast experience will surely help boost SpongeBob: Krusty Cook-Off’s audience numbers, and we are looking forward to seeing the game rise up the mobile charts in the region."

In July, Tilting Point’s closed its first equity investment round at $235 million which will be used to further accelerate the studio’s acquisition strategy.