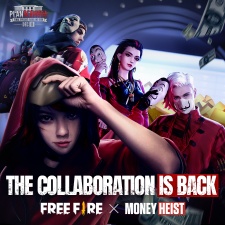 Garena has announced a second run of Free Fire’s crossover with the Netflix series Money Heist, running from December 3rd, 2021 to December 14th, 2021.

Money Heist follows a criminal mastermind known as 'The Professor' who plans to pull of the biggest heist in history by printing billions of euros from the Royal Mint of Spain.

In the event, The Professor will return to Bermuda with the aim of saving the Free Fire qquad caught during a heist. Players will help in this, following instructions to unlock various in-game missions.

Additionally, the crossover will feature an in-game reskin, a new interface and exclusive collectables themed around Money Heist.

"We think about what our players would enjoy, and look for ways to assimilate it into the Free Fire universe. Content that will bring communities together - whether in or outside the game - is what we hope to celebrate with this campaign."

Free Fire has continued to grow within the mobile battle royale space, outpacing competitors PUBG Mobile and Call of Duty Mobile as the most downloaded battle royale mobile title for H1 2021.