Mahesh Athirala details how he started the award-winning studio. 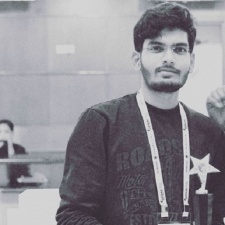 This week, we spoke to Street Lamp Games co-founder and senior game designer Mahesh Athirala surrounding the difficulties of getting into games in India.

Mahesh Athirala: I always wanted to make video games from my childhood. It was more like a dream. I used to skip school to play games most of the time and that's where my interest, not only from the playing aspect, but also the development side originated from. Back then, choosing game development as a career in India was not really an easy option, though the game industry is slowly growing, it’s difficult to get a job without any experience.

The passion I have for games and the confidence of making great games always pushes me to my limits, so I wanted to take a leap of faith.

Eventually, I made my break into the video games industry in 2014 as a developer. A year later I co-founded Dropout Studio with my friends before each sadly dropping off one by one. The passion I have for games and the confidence of making great games always pushes me to my limits, so I wanted to take a leap of faith.

Following this, I co-founded Street Lamp Games and we were fortunate enough to release a few successful games on mobile, PC, receiving a number of awards. And that's how it's all started.

As a studio head, I usually go through all our games making sure I'm there at every moment of development. So between assigning tasks to everyone, I mostly split my time talking to the team, sharing our ideas, creating new levels for our games and creating beautiful environments. More importantly, I make sure that I am spending enough quality time with my loved ones while making sure I have enough Monster Energy stocked in the fridge.

The biggest challenge for me is time and game visibility - especially when you're a solo developer, it can be a very big challenge to manage everything singlehandedly. Developers put blood, sweat and tears into the creation of the game - but failing to bring the game to an audience, now that's the most terrifying part of it all.

How do you define 'success'

For me, success is when people are playing our games. The most motivating thing can be seeing someone really enjoying themselves via something you've created. It's an amazing feeling. And of course, money is important. When we have good metrics, it really helps to be financially stable and good enough to survive to create another title.

I have mixed feelings about the mobile games market. In some ways, it's great to be able to reach millions of players globally, but the competition is so huge for freemium or free-to-play games that without having a proper budget on UA, it's pretty tough to stand out for indies.

Sometimes, premium games can work out well. However, sometimes it's even harder to get discovered. But that's when Apple Arcade arrived onto the scene, now giving developers a chance and allowing developers to not worry about discoverability, instead just focusing on creating fun experiences.

We're working on our new game called Cursed Arena. A group of four animals will be generated in every level, where at the least two animals should survive until the end of the round end before proceeding to further levels.

It might be a success or a complete failure but consistency and patience will help propel you towards your dream.

The player's job is to protect the animals from different enemies, obstacles, and so on. We have created multiple arenas with a unique boss in each as well as spikes, poison, fire and more.

We're also working on a new project, which is an emotional story-based game that is currently in the prototype phase. Furthermore, we are planning to add more arenas, enemy types and bosses to Cursed Arena.

Cursed Arena will launch on mobile, PC and Nintendo Switch platforms soon, with plans to bring Cubots The Origins to iOS and Switch.

I always say that with being an indie, sometimes you'll be a designer, sometimes an artist or a programmer, either you can be alone or working with a very small team, so don't expect anything from your first game. It might be a success or a complete failure but consistency and patience will help propel you towards your dream.

Working continuously towards a goal without any good results can easily be discouraging and therefore it may be tempting to give up, though stick at it and your first success may stem from this. Look at what motivates and inspires you, then share this with your teammates.It’s a small thing but can go a long way.

Oh, and always remember that when work and play are pretty much the same things, you have nothing to lose. If you fail, don't give up. Just go again.