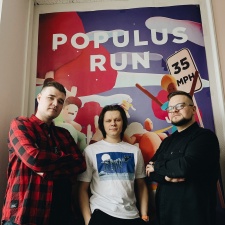 FiftyTwo: We previously worked together in an IT company developing media software, which later turned out that each of us dreamed of making games. So from here, we started working on our first game in our spare time.

Working self-funded on unpredictable game projects for such a long time is challenging.

On weekends we would get together at home and dive into game development. Later when we were getting closer to completing our first project, Jellies, we left our full-time roles rented our first office and founded what is FiftyTwo.

There is no clear schedule but we do consider our days to be a bit like Groundhog Day. We wake up, go to work and after work go home to sleep, before waking up again and starting all over.

We have never attracted investors, as we want to remain independent. As a result, it takes two to three years for us to make a game with the development of our next game being funded by the sales of the previous one.

Working self-funded on unpredictable game projects for such a long time is challenging. There were some financially difficult moments, but we thankfully overcame that period.

For us, success in game development is when you give yourself to the game, you love it during the development cycle and in the end, people love it and enjoy playing. Success is in the harmony of making something valuable and being happy with the process.

The mobile games market is one of the best opportunities for indies. Mobile games usually don’t require so many resources to make a best-seller. Indies are small teams, so we think casual games for the mobile market are a good choice.

Subscription services are very good for indie teams who aim for quality paid games as well. We are confident that we will see a lot of really outstanding mobile games soon. A similar story was in the TV market when Netflix and other platforms appeared at first.

Could you tell us about your latest game, and why it felt right for mobile?

Our latest title, Populus Run, is a running game where you control a crowd of people. The goal of these people is to avoid junk food and stay fit doing sport.

Populus Run was designed to be a mobile game from the very beginning. It’s good for the platform because players don’t need to control running, they just need to turn and jump. That’s why it’s quite easy to control with the touch screen.

Working self-funded on unpredictable game projects for such a long time is challenging.

The partnership with Apple began with our first game, Jellies, which was previously featured as App of the Week on the App Store. From this, we got in direct contact with the App Store team in Russia and the US. We stayed in touch with Apple, receiving feedback on our existing projects and showed them what was next before they signed us up.

When Apple introduced Apple Arcade in March 2019, we immediately fell in love with the new service. We immediately thought that it would be cool to release Populus Run on the platform.

All the basic principles of the service are exactly what we value in mobile games: no ads or in-app purchases, an offline mode and gamepad support. Players can discover lots of new original games through the service and that’s amazing.

The Covid-19 pandemic didn't really affect our work that much, as we work quite isolated from the outside world. We’re currently renting a small office in the centre of our hometown and as soon as the lockdown was cancelled, we continued attending the office. Additionally, we recently got vaccinated, so that helped with any worries.

Nothing specific. We are now working on an update for Populus Run and then we will start to think about what comes next. But for now, there are tons of new levels that we will roll out for Populus Run throughout the year and beyond.

A limitless budget sounds like limitless possibilities, yet it seems that to do something good you need limitations. A limited budget is especially useful for ourselves as if not, we would take forever making the project and would never finish it.

The most important two aspects are to find ways to make the development process faster and more importantly, to keep that process enjoyable.