"I’ve been working more hours than I would ever encourage other people too." 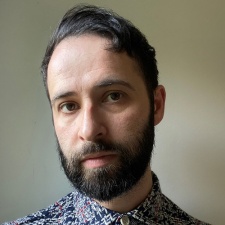 This week, we spoke to solo developer John William Evelyn who created the hand-drawn, first-person adventure The College Atlas for Apple Arcade.

John William Evelyn: It’s a very, very long story, so I’ll give a digest version. In my school and college days, I made small little games in my free time using tools like Klik and Play, the Games Factory and eventually Flash. After university, where I studied a multi-disciplinary media degree, I ended up working as a graphic designer, developer and sometimes producer in media agencies, both in permanent posts and for many years as a freelancer.

After working primarily on film campaigns and similar through agencies, I started to really get an itch to return to making games. I began making Flash games in my free time and secured sponsorship deals, which would go out on sites like Newgrounds. Eventually, this led to me being the go-to person for any games-related work that came our way at the agency I worked at. At the time, it was common for big console releases to have some kind of browser game to help promote the launch. I made a fair few of these.

In truth, I’ve been working more hours than I would ever encourage other people too.

Fast forward a few years, and after a period of serious health difficulties, I decided I really wanted above all else to solely focus on games. My heart really wasn’t in marketing campaigns at all, so my first step was to make a small mobile game called A Skyrocket Story.

I’m hesitant to answer this. In truth, I’ve been working more hours than I would ever encourage other people too. This project has been the product of feeling compelled to do something and I’ve really pushed myself.

More broadly speaking, day-to-days are a question of spinning plates really. I bounce from coding tasks to pen and ink work to design and writing to music. And along the way, there’s a whole lot of working with spreadsheets - far more than I think my friends and family realise.

Managing a budget at a granular level, arranging the legal and contractual side, and hitting milestones effectively is a real challenge. Producers are massively underrated as is their skill set - and if I were to undertake another project of this scale, I would definitely try to find someone to help in that aspect.

The two biggest are working effectively and not burning yourself out as well as securing the right kind of financial backing for your game i.e. people who are very much buying into your idea and have a genuine belief in it.

I am not naturally the type to ever feel particularly triumphant about things I do or have that feeling of success - so to speak. I suppose if I take a step back and really think, perhaps if the original kernel - the original spirit of an idea - if that remains intact and palpable in the final product of my work then I guess that’s a kind of success! Certainly, with The Collage Atlas I’ve fought really hard to stay true to my original intentions and not get distracted by tangents or trends.

The industry will forever be shifting around us and beneath our feet. In many ways, the core challenge doesn’t change but the form it takes does - and that is, how to make the game you want to make without bankrupting yourself or anyone else! At the end of the day, Money will always be a massive challenge.

In broadly creative terms, and on a more positive note, there is a dizzyingly big market out there and the last 20 years have seen a huge diversification in terms of what kinds of games players will engage with. In decades gone by, I think I would have been laughed off the face of the Earth for my extremely low-poly approach - not to mention lack of scores or traditional narrative structure - but not now.

In that regard, and given the continued success of publishers like Annapurna Interactive and Devolver Digital among others, that put out fantastic and experimental games, I would say the market creatively-speaking is in great health.

I have a compromised immune system so I’ve been in isolation since February - that has really intensified this last stretch of development and sadly ruled out any kind of launch day celebration.

Could you tell us about The College Atlas, and why it felt right for mobile?

The Collage Atlas launched as a cross-platform title, so it’s available on iOS, AppleTV and Mac. But I think it’s fair to say that for me there’s a little extra magic in having some games in your pocket. My game is supposed to offer reassurance, comfort and hope, so thematically it’s a great fit.

How did the partnership come about with Apple and Apple Arcade?

I had an investor who was backing my games development and approached Apple about my game pretty early in the project. At the time, the hope was that maybe we could convince them to feature the game on launch day or something to that effect. It really was just a punt at that point. To my surprise, they got back to me. One of the UK Apple team had come across the game and wanted to know more.

I had a meeting with them, to talk through what the game was all about and what my plan was for it and they seemed to just get it. I hadn’t signed with a publisher or a distributor yet, so everything fell into place after they saw the potential. I was excited to work with Apple.

It’s been particularly difficult, though primarily the studio is just me. I have a compromised immune system so I’ve been in isolation since February - that has really intensified this last stretch of development and sadly ruled out any kind of launch day celebration. I might have a celebratory pint in 2021 with any luck!

I had some incredible assistance from the team at Kitteh Face these last few months. The group helped with platform integration, cloud save stuff, user account switching and all that crucial stuff. I’m in the UK and they’re in the US, so with regard to that particular aspect, Covid-19 had a minimal impact. We would have always been remote anyway.

I do still have some plans for The Collage Atlas in the works, so there will be some significant additions to that in time, though nothing I can go into right now.

Beyond that, I do have a number of project ideas I’m currently developing. There are more worlds I want to explore and a couple of stories I’ve been developing for the last five years, so we’ll see what comes of those!

AR as a technology is finally providing stable and truly usable results. It’s wild to think about, given that an agency I worked at about 10 years ago used to make AR browser toys for the likes of the first live-action Transformers movie - and we’re only now getting to the point where it’s really robust.

I have some ideas for a persistent, shared AR narrative experience that could be neat. But I’d be foolish to take that on alone, so teaming up with some real technical talent there would be great.

I don’t really know that I’ve ‘made it’ so I feel a little self-conscious speaking to that. I suppose that will look different to different people. For some, it will be about numbers and reach, while for others it might be more about fully realising an idea they’ve long held.

My own personal perspective is that creating things - or indeed any kind of work - is inherently hard and sometimes it can be really draining. So perhaps ‘making it’ in that sense is about navigating the ‘work’ aspect while still satisfying your creative hunger.