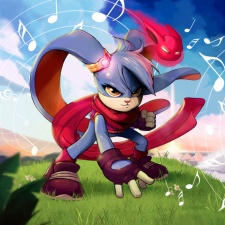 Paulo Bohrer is the co-founder, music composer and sound designer at PixelHive

This week, we spoke to PixelHive co-founder, music composer and sound designer Paulo Bohrer as well as Soedesco PR manager Linda Bendsneijder, surrounding the development and publishing of Kaze and the Wild Masks.

Paulo Bohrer: I was attending game jams and meeting people in search of a great team, where I could squeeze in and be part of a game project - in fact, that’s precisely how I got to know the other developers from Kaze.

The result was Kaze and the Wild Masks, a love letter to all the 2D platformers we loved as kids from the 90s.

Paulo Bohrer: Very busy! Each of the developers from PixelHive has their own unique routine. Whether that be full-time work, extra freelance, or the development of Kaze.

It's difficult for indie developers to invest their time, talent and money when there’s that huge uncertainty ahead of them.

Working at PixelHive and developing Kaze is not my full-time job. I guess that is true to many indie developers out there who would like to have a steady income but also invest in their own personal and original projects.

Fortunately, my full-time job is in another awesome game studio and as a result, I get to simultaneously work on many great projects.

Paulo Bohrer: Managing my working hours so that I could still have a healthy life out of work was a big challenge to me and it took me some time to finally find a good balance between these.

A big challenge for us at PixelHive was to keep engaged and motivated with the project during the whole development cycle. It's difficult for indie developers to invest their time, talent and money when there’s that huge uncertainty ahead of them.

You can’t predict how people will react to the game once it is out there, so you can only hope for the best.

Linda Bendsneijder: Success is when we see the game is loved by many. When we get lots of player engagement, we see it as a confirmation that people enjoy our games. Both before and after the game’s release, we care about starting and maintaining meaningful conversations with the community.

Engaging with our audience is also a great way for us to map the right direction of the game during its development stages. But also after release, we care a great deal about listening to the community and further improving the game for a greater player experience. With Kaze and the Wild Masks, we already noticed a lot of interest before the game's release.

On top of this, the developments in game streaming already allow for any game, no matter the graphical quality or performance, to run smoothly on mobile devices.

For us it's a fantastic opportunity to bring Kaze and the Wild Masks to mobile through Stadia. We've received quite a few comments from people who told us they do not own a PC or console, but were still able to enjoy Kaze on mobile - and that's great.

Could you tell us about Kaze and the Wild Masks, and why it felt right for Switch?

Paulo Bohrer: Definitely! I think Kaze and the Wild Masks fits perfectly on Nintendo Switch. Since our game is a love letter to the 90s platformers that we grew up playing on our Super Nintendo and Sega Genesis it just felt right (if not essential) for the game to be released there.

Nintendo has that warm nostalgia magic on their consoles and games, and Kaze is much about that.

How did the partnership come about with Nintendo?

Linda Bendsneijder: Nintendo is one of our most long-lasting partners. Given that Kaze and the Wild Masks fit so well on Switch, it was unthinkable not to bring the game to Nintendo.

We’ve gotten so many positive messages from people all over the world and we notice our community is growing each day.

We've seen the game has arrived on Google Stadia? Talk to us about the decision about bringing it to the platform.

Linda Bendsneijder: It's one of those charming games that speaks to a wide audience. We are certain that newer generations will also be able to connect with the game due to its modern look and feel with smooth platforming abilities.

As the game speaks so well to young and old, we wanted to bring Kaze and the Wild Masks to Google Stadia. We felt that Stadia has a whole new and wide player base to offer.

How happy are you with the game's launch on Switch? Any sales, downloads or other data you can share?

Linda Bendsneijder: We are definitely happy with the launch. We’ve gotten so many positive messages from people all over the world and we notice our community is growing each day.

Players worldwide have left very positive reviews and we couldn’t be more proud!

Paulo Bohrer: Right now, we are very focused on Kaze’s release and seeing how the public responds to the game. We’re collecting feedback from players around the globe and making sure that we are delivering the best experience possible for them.

We’ve worked pretty hard to release the game as polished as possible and we are very proud of the result we achieved. Although we have indeed started some talks about the future of Kaze and PixelHive, we don’t have anything concrete to share just yet.

Paulo Bohrer: I don’t believe there’s a secret recipe that you will follow and be a successful indie developer. It can be very unpredictable what will ‘make it’ and what will not. Take Kaze and the Wild Masks as an example: we don’t hide our inspirations, it is a game heavily influenced by titles from 25 or 30 years ago.

Some will say that you should create something completely original, that your game should have a deep narrative or that it should be in pixel art.

The truth is that year after year we see amazing indie games coming out and more often than not they are completely unexpected successes.

Take 2020 as an example, many successful indie games had a huge impact on our lives because of the pandemic. It was (and still is) a pretty harsh moment, so the ‘timing’ of a release can be as important as anything else in your product.

From the experience of developing Kaze and the Wild Masks, I can talk about the importance of having a very polished game. We have always iterated and tried to go one note higher. We never took anything for granted.

Make sure that it is pleasant to play, make sure that your animations are working correctly, refine it and polish it as much as you can. Talk to more experienced developers and take your feedback very seriously.