The Big Indie interviews: IDEA Games tells us about making a new kind of word game in OtherWordly 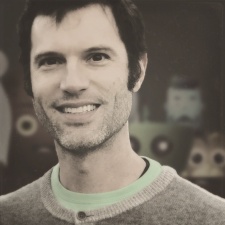 Today, we're speaking to Michael Douma from IDEA Games, who pitched OtherWordly at The Digital Big Indie Pitch #3 (Mobile) in August and walked away with the prize for third place.

Michael Douma: IDEA Games differs from other indie studios because we have an educational twist. We're driven to make the best new word game, based on word meanings, with the hope of having players learn a few new words, or maybe even a hundred new words. We hope to draw in both word lovers and other casual mobile game players.

The studio consists of two full-time developers (Michael Douma and Greg Ligierko), with important contributions from seven other specialists who work on design, content, audio, characters, and thesaurus content. For example, Morgan Smith, our level designer, is endlessly creative in coming up with new combinations of obstacles to beguile players.

Tell us about OtherWordly that you pitched at the competition.

OtherWordly is a thought-provoking word puzzler with a space-themed look-and-feel. The essence of the game involves matching a core word with orbiting words that have obscured letters. Players match related words by flinging the core word toward the orbiting word while adapting to ever-changing obstacles. It delivers a peaceful, meaningful play experience based on language, word meaning, and trivia that simultaneously engages many dimensions of players' minds.

What do you think are the most unique and interesting aspects of OtherWordly that gamers may never have seen before.

Players are immersed in words, thinking about which word matches another (e.g. "stable" and "horse"), with the twist that some letters are missing (so it looks like "sta_l_" or "h__se"). This is not a spelling game. Rather, the thought process involved in playing OtherWordly is more like the intellectual experience of solving a crossword puzzle.

OtherWordly has a massive amount of content. The game contains over 30,000 unique words – synonyms, antonyms, and trivia. So not only is each level visually different, but the content is always fresh. There are enough easy words to win, but word buffs and trivia junkies can reign supreme.

The visuals are fresh and the story is interesting. There's a gently swirling world of orbiting words, with cheerful characters, interesting obstacles, and a quirky mystery narrative about why letters went missing.

Word-based puzzlers are a highly competitive market. What made you choose this genre, and what do you think you bring to it that may not have been seen before?

Most English speakers know between 20,000 and 35,000 words. Shakespeare’s entire corpus encompasses about 25,000 words, including at least 1,700 – like alligator, gossip, and hurry – that he invented or introduced. OtherWordly exposes players to over 30,000 unique words and passages from 1,000 published works. For every in-game word, there’s an example of usage from a literary source. Those sources include Pulitzer prize-winning fiction and nonfiction works, from J. K. Rowling's “Harry Potter” series to Kazuo Ishiguro's “Never Let Me Go.”

How did you come to choose the platforms that you would develop OtherWordly for?

We wanted to build a casual mobile game, easily played by a general audience in bite-sized chunks of time. We targeted iOS because we previously developed an iPad app a few years ago, and we like the Apple developer environment. If our game is successful, we'll port it to more platforms.

Of course, it's hard to survive as indie developers. We're not in it just for the money -- we also want to have a meaningful impact on players. But as with all developers, we compete for player eyeballs, and have to craft freemium experiences that draw in players, and achieve the right balance of monetization. The investment is inherently askew since more expensive development means a better game, but more investment money is at risk. But it's been hugely satisfying working on OtherWordly to weave together all the elements that build a good game that many players will love.

My advice would be to plan the marketing message in tandem with planning features, to help focus efforts and limit the temptation to add superfluous features.

I'd warmly encourage other indie developers to pitch at future Big Indie Pitches.

Pitching was a useful exercise in honing a tight presentation and summary of my game. This helps with planning our marketing. It's hard to replicate the adrenaline and focus in the abstract, but with real judges and real stakes, I was able to focus in a super-tangible way. Overall, the virtual setting was very convenient – there was no travel and no costs.

While we didn't have the serendipitous conversations with other developers we might have had in-person, during the downtime between pitches, I joined the developers in reviewing and sharing a few minutes of feedback on other contestants' video trailers. That was useful and practical since it's hard to get good feedback on trailers.

Virtual conferences mean we don't get the subtle physical cues and direct eye contact of real life. It's more like a standup comedian trying out new jokes with a silent audience. But it was still quite useful.

I appreciated the opportunity to strip down my presentation to its core essence and to try out variations of my pitch. It's hard to do that in the abstract, standing in front of a mirror or endlessly editing and re-editing text. So, the top gain was focusing our marketing message. As a third-place winner, I'm happy for the chance to help promote my game in this interview.

We still want playtesters, especially since in-person game conventions are suspended this year. For readers who have a recent iPhone or iPad and want to try out our peaceful puzzler, add your email to the OtherWordly game web page.

We also would love to find a financial sponsor so that we could release the game free, not freemium, allowing more players to play and learn. Any readers with creative sponsorship ideas can contact us online. (https://www.idea.org/contact/)

We are hoping to inspire other game developers to build more games based on language. A century ago, crossword puzzles were widely popular, played by millions of different kinds of players with pencil and paper. The crossword didn't survive the evolution to digital, but there's room for a new generation of games based around word meanings. We hope other developers make more games based on the meanings of words, and we also have a new endless runner in development where the player selects paths with a related word, e.g., jumping from the "fiery" path to the "volcano" path, but not the "iceberg" path. In addition, we are planning variations of OtherWordly geared to players learning English.

We also have two-word reference apps coming out in 2021: A massive thesaurus, “In Other Words,” with five times more words than any other thesaurus; and a totally new word brainstorming tool, “Wordakin,” that shows a pool of word bubbles that relate to any two seed words. For example, users can discover that “purity” is related to “innocence” and “clean.” Wordakin is both a tool for writers and a fun exploration for anyone who likes language. OtherWordly is integrated with these apps, for players who want to go deeper to learn about any word. They can, for example, read a full definition, read more literary examples of a word, and see related words.